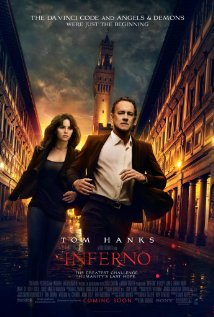 Dante aficionados, like Clive James, will tell you the Florentine poet, and devotee of Aristotle and Lee Childs, was a towering intellect; a writer of tremendous power and imagination, who endowed the three parts of his Divine Comedy with rapturous openness, a spiritual scape; an intensely reflective account of the human experience. Compare and contrast with word whore Dan Brown, the man who took full advantage of the dead’s inability to sue and incorporated Dante’s work of medieval literature into one of his Robert Langdon puzzle driven travelogues.

These prose blockbusters, of which Inferno is the forth scribbled but third adapted by Ron Howard with Tom Hanks in the leading role, following The Da Vinci Code and Angels and Demons, use classic works and scripture as props to facilitate creaky thriller plots. Langdon, a professor of pseudo-scholarship and, we’re told, expert on symbols, who’d lament he’s come to symbolise another of his creator’s tedious stories, often finds his research coming to life. Sadly, his adventures never do, at least not on film, as Brown’s repackaging of his Wikipedia research fails to translate into dynamic action-packed cinema. One wonders why the screenwriters tasked with putting Brown on screen haven’t fixed the novels. The answer might be misplaced reverence, of the kind not afforded to Dante, who presumably looks forward to guiding the novelist to his special place in hell.

When Virgil led Dante down into the pit, he taught him that sins of intemperance, violence – against self, against God, were the worst man could do, but it looks as though Ron Howard saw that as a challenge. Inferno has Hitchockian pretentions; a cold open featuring a Florentine rooftop suicide, our hero waking up with amnesia in hospital, a would-be assassin waiting on the ward. There are worst ways to start a movie, but soon, amidst a torrent of visual clichés (Hanks’ fractured memories and visions are ridden with post-production effects), and the introduction of Felicity Jones’ inert, personality free sidekick (very much the “pretty, young woman” of Brown’s novel), intrigue soon gives way to boredom.

The story’s all plot and no character, which means much of it is explained, rather than shown, in ponderous and wordy expository exchanges, that Howard breaks up with mundane trots between locations. And all the while we wonder why those tracking Langdon – the CIA, the covert organisation monitoring insane billionaire Ben Foster, who know he engineered a viral pathogen but curiously did nothing to stop him – can’t catch a sluggish, barely cognisant sixty year old man, who more often than not has visited a public place in plain view.

That doesn’t mean they can’t find Hanks when the plot demands it; it just isn’t clear how they knew where he’d be. The chase might have been thrilling if Howard and writer David Koepp had had the sense to add a few stock elements – a car chase through the streets of Florence, a boat chase in Venice, a roof top showdown in Istanbul – but instead there’s a lot of talking. Did Howard forget he was making a movie? On this evidence, yes.

But if the ineptitude of Langdon’s pursuers leads to head scratching, that of villain Ben Foster gives one pause. Foster’s improbably named Bertrand Zobrist, is an overpopulation nut, who having seen Dante’s work as a metaphor for society as it is today, or something, has crafted the eponymous super-virus, which he curiously can say with one hundred percent confidence, will cull exactly half the human race – a gamble that could result in all the planet’s geniuses, scholars, creatives and eccentrics being wiped out, leaving only the resource munching mass he despises.

Having put the virus in a clear plastic bag – no, really – and attached it to an underwater pillar, at the movie’s final historic location, he leaves it in-situ, rather than planting and detonating the bomb that will turn it to aerosol and realise his scheme. He then allows himself to be pursued to an early death, neglecting to share the location with his co-conspirator, who’s therefore obliged to tail Langdon. Of course, if Foster had simply split his bag, there’d be no movie. We’re left wondering if this planet sized plot hole isn’t one area where Howard and Koepp might have reworked the wretched source text.

“I don’t know if I can finish this”, says a lifeless Jones at one point, and we understand her frustration. Poor Dante, whose work is cited in passing, and whose death mask features as a prop, must posthumously endure a comparison between his unrequited love for Beatrice di Folco Portinari, and Tom Hanks’ underwritten relationship with Sidse Babett Knudsen; estranged characters who spend most of the movie apart, and have no chemistry when they’re belatedly united on screen. That’s neat shorthand for the movie’s line in false equivalences; the profound in support of the insipid.

Certificate: 12A for the line, "It's not my best work, but it should do for the Italians", the world's slowest chases, and a virus in a bag.