Film Review: War on Everyone 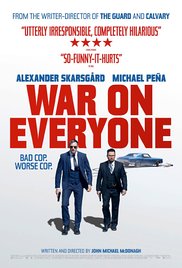 Are the BFI now funding movies based on the applicant’s last effort? John Michael McDonagh, director of Calvary, has done great work up to now, he’s even met the test of cultural distinctiveness, upon which our hard earned, carelessly gambled pounds are supposed to be dependent. Perhaps the flippant screenplay to War on Everyone (WOE indeed) read like great craic; a smashin’ bit of brazen, nihilistic, corrupt buddy cop black comedy, likely to score with Tarantino and Lethal Weapon nostalgists. But a great movie needs more than mean-spirited witlessness, it needs humanity, perhaps even a moment of warmth here and there. It needs dialogue with greater depth than pub banter. Unfortunately, McDonagh didn’t try any harder than that.

“It starts and ends with the script”, says one of the movie’s stock characters. What is it about a director’s death drive, when he knows the material’s weak, that he feels compelled to lace the screenplay with asides that inadvertently, subconsciously, act as shorthand for the film’s failings? War on Everyone, every so often, signals its weaknesses this way. McDonagh compounds the error by pretentiously namechecking literary authors throughout. It’s a lazy way of simulating a layer of non-existent sophistication; the idea that the movie’s invested with a knowing intelligence. In reality, what McDonagh really knows, is that he’s chosen to give us something decidedly shallow; a first draft script. It’s a mistake that none of the authors mentioned, Conrad, de Beauvoir, would have made. They’d probably have recommended a song less obvious than The Clash’s “I fought the Law” for the end credits, too.

If you like the brutish, bullying paring of Alexander Skarsgård and Michael Peña, perhaps you’ll enjoy their corrupt shenanigans, and delight in their belligerent shtick. But if you operate on the principle that antiheroes are fine, provided the villains are demonstrably worse; immoral as opposed to morally flawed; then you’ll struggle to find the virtue in the story.

McDonagh’s screenplay recognises this is an issue. It belatedly acknowledges that if we’re going to root for Skarsgård and Peña we have to hang our hat on something. So the towering Alexander is cast as a lonely figure, with an abusive childhood. Peña’s a family man, though one who’s funded his brood using bribe money, providing Skarsgård with an emotional rock and relatable friend; one who shares his self-serving outlook. This is the Lethal Weapon template, retooled. Yet, in Richard Donner’s series, we liked both characters, so wanted Mel Gibson to find love and Danny Glover to enjoy a well-earned retirement. Here, Skarsgård’s attempt to cultivate a relationship with Tessa Thompson and punish a sexually abusive aristocrat, have less purchase on our sympathies, not least because neither Skarsgård nor Peña seem any greater than the sum total of glib words put in their mouths. They’re cartoon characters who fail to register a single moment of real feeling, and consequently their backhanded attempts at doing the right thing amount to little more than conspicuous plot mechanics.

The movie looks good and occasionally rustles up a cheap laugh, but in a world where Pulp Fiction exists; a film set in a genre world with characters that nevertheless exhibited interiority and thoughtfulness; that’s not good enough. The lesson for next time? Do the work on story and character first, then add jokes.

Certificate: 15 for obvious soundtrack choices, CG blood, and bringing the House of Lords into disrepute.