Film Review: The Girl on the Train 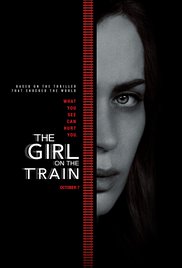 Relationships on the buffers

Many novels are written with a movie adaptation in mind these days; it’s a lucrative prize for would-be novelists; but the danger is that what induces page turns – plot contortions, games with perspective, notes on the interior life of characters and the attendant frustrations and pitfalls hotwired into their lifestyles – will crumble when subjected to the pitiless, distant eye of the movie camera. Movies that are too densely plotted are in danger of playing as contrived, and Tate Taylor’s version of Paula Hawkins’ novel is such a film.

Not all of these failings will be attributable to the source material; the movie’s clumsy attempt at introducing the audience to its premise – a woman (no girls here, for those on mistitle watch) keeps an unhealthy eye on her ex-husbands’ new family and her old home on her daily commute, while living vicariously through an unknown former neighbour and her seemingly loving relationship a couple of houses down the line – doesn’t inure us to the material. By the time the movie gets its psychological ducks in a row, and the relationship between the troika of damaged women that power the story becomes less opaque, it’s all starting to look decidedly creaky. One’s left to reflect that the closed and interrelated world the characters inhabit, with all its unhappy and relationship driven complications, probably reads better when presented as intimate, confessional first-person parallel narratives, which in the best traditions of the novel thriller, would eventually converge, thereby earning the admiration of book critics who prefer their stories designed rather than true.

Still, there’s plenty of melodramatic intrigue to what’s on offer, even if this Gone Girl variant does start to buckle once the neighbour goes missing and Emily Blunt’s drunk and desolate jilted ex-wife, looks to be in the frame. Blunt’s committed performance is the film’s saving grace; she’s its broken heart and soul; and we have enough interest in the emotional fallout from her alcoholism and failed relationship to go with her on the implausible journey she embarks on – tapping up the neighbour’s husband in a bid to learn the identity of a mysterious lover clocked on the passing choo-choo, visiting the neighbour’s shrink; in short, launching a missing persons investigation of her own, the gimmick, in a story built on the same, that she could be responsible for the crime under glass.

She’s not of course, that would be the oppressive pig of a philandering husband, who has a penis in every pie, and is just the kind of heartless, immoral shit we’ve come to expect in lady-centric thrillers whose central concern is male selfishness and misogynist control in modern relationships. Gone Girl was a better story in that respect; a great leveller when exploring the manipulations of the sexes. Here, the third act revelations that recast all the bad feminoids on display as victims of tragedy and patriarchy, make for a highly implausible and schlock-centric finale, that repurposes that most middle class symbol of domesticity – the trusty corkscrew – as a murder weapon; shorthand for story’s subversion of aspirant, leafy suburban lifestyles.

That’s probably why the readership found it shocking, if they did, but for those of us less shocked, we’re left with a movie that could and should have been better structured to tease and develop its core themes, and perhaps rethought in places, to keep a movie audience, with its lesser tolerance for convenience, better satisfied.

Certificate: 15 for featuring a lead actress the short sighted will mistake for Jennifer Lawrence, the happy coincidence of a red signal so close to Emily Blunt's old house, and the evil that men do when imagined by women.