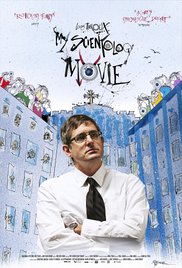 When Louis Theroux’s long cherished idea of investigating the sinister cult church of Scientology; Sci-fi writer L. Ron Hubbard’s contribution to the world of theisms; hit a wall a silence, he and director John Dower came up with a novel solution. As talking to the cult’s church’s figurehead David Miscavige was out of the question, or indeed any of the organisation’s active members, as lifting the lid would risk excommunication and a billion years of misery in successive lifetimes, Theroux recruited Scientology “apostate”, and Thetan exile, Marty Rathbun, Miscavige’s one-time enforcer and right hand man – the Vader to his Emperor – to work through his experiences and the church’s inducting practices, using a series of ‘therapeutic re-enactments’. In other words, they’d make a kind of Scientology movie, rather than a strict documentary about Scientology, with Rathbun as a creative consultant and script doctor.

What follows is an occasionally hilarious, often troubling film, in which the organisation under glass remains frustratingly elusive – its humourless acolytes making the odd appearance in crude attempts at intimidating Theroux’s crew. For the most part we’re reliant on a progressively uneasy, often defensive Rathbun, as our primary source; the man who allegedly witnessed Miscavige’s “reign of terror” first hand. Using the device of casting for dramatic recreations of key moments in the recent history of the church, Theroux and Dower pry open Rathbun, asking him to re-occupy the “head space” that conditioned his years of loyal service.

At first he’s a willing collaborator, praising the intense, bullying brutality of actor Andrew Perez, who he says succeeds in channelling the Master’s aggression. But later, as the roleplay takes on the character of lived experience and the inevitable questions are pressed by Theroux on what Rathbun did to those requiring a little ideological reinforcement, there’s squirming and anger. Indeed, Rathbun’s subsequently disowned the film.

The fragile relationship between Rathbun and Theroux gives the documentary a palpable dramatic tension. We laugh at the absurdities, but pause when considering that Rathbun is affectively an abused man who became a willing abuser, and is now struggling to reconcile the two. We’re also conscious that if it wasn’t for Miscavige’s alleged megalomania and paranoia, and his decision to exile Rathbun, and have his retinue hound him in perpetuity, Theroux’s Scientology expert would probably be force choking someone right now.

So there’s a moral ambivalence to Theroux’s arm’s length investigation. It’s the kind of film he makes so well; a documentary that flirts with the disreputable and the vulnerable, with the non-threatening inquisitor hoping to gently uncover the facts. As we’ve recently seen with the case of Jimmy Savile, Theroux doesn’t always succeed. In Savile’s case one could get a sense of something rotten about the subject without knowing the depth of it. My Scientology Movie has that same sense of trying to keep a grip on gas. It’s an illuminating insight into the character, practices and business model of Hubbard’s secret society, but one that must settle for walking the perimeter fence, looking in.

What we really want to know, beyond the troubling anecdotes and intuitive discomfort from brushes with angry foot soldiers, is what goes on behind closed doors – the secrets in Tom Cruise’s closet. Theroux succeeds in putting a glass to that door, but no more.

Certificate: 15 for intruding actresses, Tom Cruise, and shouting at an ashtray.