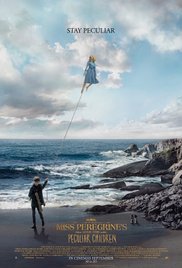 Tim Burton used to say that he wasn’t very good at telling stories. Those that have patiently sat through his work over the last twenty years have come to realise that wasn’t false modesty. For a time, his limitations, when it came to the development of plot and character, were tolerated, for whatever else Burton was, he had a distinct, if derivative, style, and a black sense of humour. His gothic sensibility was oddball and edgy; he was mainstream American cinema’s ambassador for outcasts and eccentrics. But as the years advanced his appropriated expressionism turned to shtick and the edge became whimsy. You’re probably as tired as I am of hearing “this should have been the perfect story for Tim Burton”. It’s become a truism. And with Miss Peregrine… it’s applicable once more.

On paper, this fugue of Harry Potter, Back to the Future, X-Men, Groundhog Day and, er, Goodnight Sweetheart (with a side order of Lemony Snickett), has plenty of conceptual meat to entice kids and the young at heart. One might say it’s a composite children’s adventure that feels programmed to hit as many familiar marks as possible; a postmodern collage of favourite things. It must have read to Hollywood execs like a fully formed classic. Miss Peregrine’s home doesn’t just house peculiar children; it doubles as a mind map of hit movies. But it’s less than the sum of its parts.

What Peregrine teaches both children and adults alike is the importance of matching the right director with the right material. Normally, a Jane Goldman screenplay would be cause for celebration. And in the rights hands, someone like Matthew Vaughn, who understands tone and well as style, all might have been, if not well, considerably improved. But Tim Burton’s been killing his movies for a long time now, most notably the recent Big Eyes, by failing to understand, if he ever knew it, how important the right dramatic register is.

Burton’s taste for heightened theatricality – a mannered style of performance, strips material of its weight and dramatic integrity. Miss Peregrine, like many of Burton’s movies, can be enjoyed as a kind of high-concept pantomime. The performances are over engineered, as though Burton were frightened they might emotionally connect with the audience. Would it be totally anathema to the concept of a waking dream if you or I could recognise a single three dimensional human being in the story? Might it not make the outré that much more potent? But the real world is as uncanny as that occupied by those characters generated by J.K Rowling’s mythology software. As there’s no emotional investment, there’s little patience when the convoluted backstory kicks in to advance the plot in head scratching expository bursts.

If you cared about the characters, or felt you knew them, beyond their peculiarity, you wouldn’t spend so much of the running time wondering how a set of concepts this ropey could end up on the screen, unchecked. Not only does the entire story make a mockery of the notion that a time loop is a safe haven – itself a flawed idea, as a lot can happen in a day, even one that repeats on a loop, but some of what we see seems to have been cooked up just to provide Burton with a horror motif. Monsters that eat human eyes to maintain human form is a curious idea in and off itself, but when you’re told chief villain Samuel L. Jackson discovered this, your first thought, given you remain detached from the story, is, er, how? Did he visit a cannibal restaurant by accident?

Miss Peregrine delights in bursts. However, true to Burton’s recent form, these are moments that typically remind us of better work – nods to George Pal’s Time Machine, the work of Ray Harryhausen, and C.S. Lewis. Nothing wrong with stealing from the best of course, but what Burton hasn’t done, and perhaps can no longer do, is balance his magpie instinct with personality. That’s what made his early movies work so well. We miss it here. Instead there’s the sense that the movie’s an ornate product, trading on the half-remembered stories of yesteryear. Creatively, most peculiar.

Certificate: 12A for the Germans bombing a Welsh fishing village, Chris O' Dowd, and British children using a raft of Americanisms.