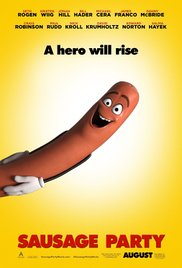 For the sake of Fuck

Somehow, and it has to be said improbably, Rogen’s gang have managed to shoehorn in more than gags about sausages slipping into soft buns (though there’s plenty of those). The movie manages to be an unlikely, if not exactly focused, allegory about the dangers of blind faith, and the wisdom of self-determination, tolerance, and the importance of intellectual curiosity in a culture that discourages the same. No one’s going to be pretend these messages aren’t handled simplistically – like partaking in a philosophical conversation in a weed cloud, though Rogen could and perhaps will argue that the heavy handed didacticism is supposed to recall and satirise Pixar’s equally crass attempts at hectoring its audience. But these themes give the movie a shape, and perhaps even convince us (at least while we’re watching the thing, though maybe not afterwards) that it’s about something.

That something could be the Israeli/Palestinian conflict, or the American diet, or the notion that we’ve become irresponsible consumers, indifferent to the horrors of industrial food production, or that the American censor’s become such a ridiculous self-parody, divorced from the sensibilities and intellect of its customers, that the only way to get explicit sex into a movie these days and achieve an audience friendly rating is to having the characters be animated. The South Park movie made the same point nearly 20 years ago, but nothing’s changed, so why not say it again?

Regardless, Sausage Party elicits a few laughs from the incongruity of kid animation and stoner comedy, and takes full advantage of its animated format to deliver some smart sight gags, as well as obligatory movie parodies. Entertaining then, and a damn sight better than anything the team’s managed in the real world for some time, hence the welcome decision to cut a scene that would have seen our animated heroes meet their real world counterparts. Believe me folks, you’re better off in Toon Town.