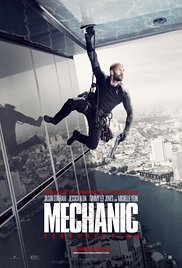 Don’t worry if you can’t remember Jason Statham’s 2011 remake of The Mechanic (cockney rhyming slang for Sydenham brute). No one does. But it must have made a few quid because five years later The Stath, London’s most successful export since Jack the Ripper, is once again Arthur Bishop, the world class assassin (and former East End orphan made child solider) who faked his death at the end of the first movie so he could live an unassuming life, without all that troublesome bespoke murder.

Like the leading man himself, Resurrection doesn’t fuck about. Within two minutes of picking Bishop up in Rio, where he’s been lying low as, er, Mr Santos, he’s armed the self-destruct charges on his harbour house boat and taken to a high altitude cafe where representatives of the underworld are waiting to strong arm him into committing three “impossible” kills. The messenger gets a table to the face and Statham escapes, like a cockney James Bond, by jumping from a cable car to a hang-glider. This, ladies and gents, is pre-title, and it tells you everything you need to know about what follows.

The Mechanic sequel is a mid-budget Bond mix tape, with a judicious drop of Mission: Impossible thrown in. Like all economy rip offs it assumes a certain b-movie, tongue in cheek quality, reveling in its clichés, and it’s subsequently very hard to dislike. Either you enjoy stock elements like kidnapped love interests used as blackmailing tools, mercenaries with hideaways in tropical locales, stocked with mobile communication centres, U-boats loaded with ICBMs, ticking bombs and lines like “playtime’s over”, or you don’t. But if you don’t there’s a certain joylessness about you that you may want to address while you have the time.

Bereft of original elements, the only question is whether Mechanic: Resurrection‘s derivative thrills pack a suitable wallop. Statham adds a lot of value – he growls his lines, he throws a dynamic punch; he’s improbably watchable. But more inventive direction, particularly in the staging of the action, wound have made the movie great, rather than begrudgingly good. There’s plenty of hand to hand, trigger pulls aplenty, but the movie employs the standard workaround for directors who don’t have a great eye for staging a sequence, namely a moving camera and machine gun editing. What a joy it would be to see Statham fight while remaining fully orientated, but that’s the stuff of a mad man’s dreams.

Still, with plot in abundance, for there’s a lot of influences to conflate, some attractive locales and much crowd pleasing MacGyvering on display, Resurrection‘s a rock solid waste of time that even makes the prospect of Arthur Bishop’s further adventures somewhat attractive, perhaps the movie’s one bona fide surprise.

Certificate: 15 for aerial insanity, a villain that cries the hero's name just as he's about to die, and Tommy Lee Jones.