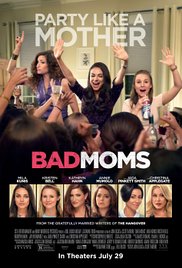 I have a foreskin. If you’re a female reader and disgusted by that, I’m sorry to inform you (and sorry that you found out via a humble review website where it’s likely you did not expect this kind of correction), that you’re sexually retarded and guilty of gross, indefensible hypocrisy – namely holding men to a socially constructed and wholly unnatural beauty standard.

Why are we talking about this? Because Bad Moms, an alleged comedy about showing a cleft to modern middle class mothering expectations, and the guilt that flows from being something less than an idealised thing, has a punishing three minute riff on the horror of men who, either unburdened by religious abuse, or unpersuaded by porn, have not been the victims of male genital mutilation. It’s supposed to be a frank and hilarious moment – women talking freely about male genitalia, cutting loose, sticking it to the man, daring to be crude, libidinous and selective, but this scene, like others in Jon Lucas and Scott Moore’s film, fails to imagine how women might achieve this social emancipation without recourse to inverted masculine idiocy. Is being misandrist funny? Because – you know, it’s a flip, innit. If you swap stereotypes, what have you achieved really, other than suggesting there’s just one template for this kind of puerile, lewd shit, and that you have no idea what a feminist version would look like?

Men are stupid in Bad Moms – useless, infantile, mostly invisible – bar Mila Kunis’s love interest and winner of the genetic lottery, Jay Hernandez (assuming he no inherited predisposition to serious illness), who wins our hearts and sympathy by being both a widower and single Dad. In other words, he assumes the role that would normally be played by a woman in this kind of cookie cutter fantasy. From the moment Kunis catches her husband having an internet wanking session with a web-mistress, the movie telegraphs its intent, namely to unite Kunis and Hernandez to form an enlightened duo that respect one another and understand their own shortcomings as parents. Super, you say, but did we really need to go through the indignity of that foreskin riff and watch a woman urinate in the street, amongst other horrors, to get there? Am I really supposed to feel good at the end of a movie that’s consistently soiled my brain?

So Bad Moms is just a variant on The Hangover, Horrible Bosses, and the like, with one grounded character flanked by a kook and a fuck up. The movie, such as it is, wastes a lot of time establishing its titular premise – three put-upon maternaloids decide to go wild – then does next to nothing with it. Only sometime in the second act do we get a sense of the conflict that might have driven the movie, had all concerned had the wit to write a few more drafts…and add wit.

The belated battle between Kunis and her nemesis, PTA president Christina Applegate, culminating in the decision to run against her, could and should have been the heart of the film. There, surely, was a chance to both satirise the piousness and apple pie values of American politics, while contrasting those tyrannical expectations with domestic reality. It could have been an Election for parents, but although said idea’s buried in the screenplay, it never surfaces long enough to make an impact. Now if you’ll excuse me, I’m going to retract my healthy, and if I don’t say so myself, rather attractive foreskin. Suck on that.

Certificate: 15 for supermarket disorder, jokes about men being crap, and sexual retardation.