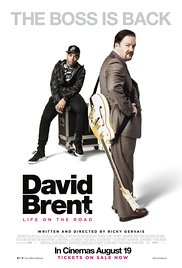 This is not Spinal Tap

When The Office became a critical smash, Ricky Gervais, its writer and star, adopted the John Cleese mantra that in order to preserve quality, less was more. There’d be two series, he said, mindful of the former Python’s decision to limit Fawlty Towers to 12 episodes, but also a couple of specials to tie up loose ends. The final instalment, in 2003, sought to do that by reaching for pathos and ending on a hopeful note. David Brent, the selfish, self-loathing ridiculant whose desperate but doomed attempts at gaining the affection and respect of others (likely modelled on a boy I went to school with), had been mined for all their worth – the comedy of social embarrassment. He stood up to the office bully, elicited some human interest from a woman who liked the unaffected part of his personality, and made his colleagues laugh. He’d been on a journey and finally, Gervais suggested, he might be emboldened to cut the crap and be a real person.

What no one could foresee was how the gradual dimming of Gervais’s star and the pining for the peak reverence for his comic abilities, personified by Brent, would turn his mind toward undoing that natural ending. A 2013 skit for Comic Relief apparently convinced Gervais that his alter ego had more to give; a dangerous assumption on the back of a five minute segment.

The result is Life on the Road, an ill-conceived and ontologically unsound Office sequel that goes the long way round to reach the same conclusion as the series, but with a great deal more contrivance. Gervais has to contort to hit the same beats because he’s forced to begin with a new set of characters, albeit in a familiar setting. To revisit Brent and get a movie out of him, the optimism of that series finale must be resoundingly undone. There’s no catching up with David several years into a happy fulfilling relationship with his date from the final episode, rather we meet a man who’s learned nothing, despite a nervous breakdown and course of therapy in the intervening years. Perhaps that’s more realistic than a happy ending, but that doesn’t stop the same feel good moments being replayed at the close – the office bully getting his comeuppance, a love interest on the horizon, Brent more at ease with himself. Is the character doomed to go through this every 13 years? Talk about unlikely for some.

Life on the Road has bigger problems than reheated character arcs and the character’s now overfamiliar shtick. The conceit is that, like the Office, we’re watching a documentary – life caught in the moment. Documentary conventions were easy enough to ape on TV, because of the single setting and different timeframes cut together to form a narrative. But here, Gervais, in tandem with some lazy writing, makes only fleeting attempts to match form with content. Doc Brown’s rapper, describing Brent, uses a football metaphor to describe his disastrous attempt at being a musician, “it’s his ball but he doesn’t know how to play the game” – words that aptly describe Gervais’s understanding of vérité conventions.

When Rob Reiner made This is Spinal Tap (a movie with attention to detail that shames Gervais), he never forgot that it was a single camera concert film with jokes. Life on the Road is a conventionally shot movie that only acknowledges the camera whenever Brent needs to give an awkward, self-conscious glance, or a character approaches to give their thoughts to the filmmakers.

The resources the fictive documentarians have deployed are truly humbling. In order to catch Brent from every conceivable angle, they have teams of cameramen in every room he might walk into, ready to provide both an establishing shot and coverage from all directions – some concentrating on medium close ups, others on close ups, so an unscripted moment that would only last seconds, can be cut together like a staged piece of scripted comedy.

Better yet, they take great care to keep moving and never to be in each other’s shots. When the fictional director of Brent’s road movie cuts from facing Brent to a reaction shot of his band, for example, you’ll be buggered if you can see the camera crew that must have been standing in that spot only seconds earlier. Brent and his roadies must also have provided their fictive stalkers with advance notice of conversations, allowing them to set up for shot reverse shot capture. And long after Brent’s departed his chemical sales company for the band’s tour, a full crew remain behind, despite their subject having moved on, for the chance to film an incoming call to work mate Nigel, the bullying from an aggressive sales rep, and sympathy from colleague Pauline, that sets up the cathartic finale. When a movie botches its brand of artifice this way, perhaps because Gervais couldn’t be bothered to redraft the script to suit it, hoping a dumb and grateful audience wouldn’t notice, it ceases to be an entertainment and becomes an irritant.

Ultimately Life on the Road isn’t fresh or funny enough to overcome its deficiencies. It feels underwritten, to the point that character development occurs in convenient bursts in the final act, rather than developing organically throughout (Brent’s band embrace him in the end, having ostracized him for the duration, despite nothing changing). But it’s Gervais’s slackhand when trying to create moments of pathos or sentiment that breaks the film’s back. The series built to those scenes, having done the hard graft to make them count. The movie sketches in the setups then asks you to delight in the payoff. John Cleese was right – two series are plenty.

Certificate: 15 for recording songs they couldn't be fucked to put in the movie, form not matching content, and Kevin Bishop.