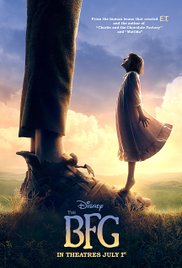 The title card for Steven Spielberg and Melissa Mathison’s adaptation of the BFG, introduces it as Roald Dahl’s, but is it really? It’s his story alright, told, a few Americanised embellishments notwithstanding, with reverence to his plot and the cut of his characters’ jib, but there’s an uncanny sweetness to the whole thing, a very synthetic kind of charm.

The culprit is Spielberg’s methodology. The film, congruously set around the time of the book’s publication in the early 1980s, is very much a movie of the now; it’s a performance capture piece, almost an animated movie, with a restless virtual camera swooping around pre-programmed environments into which Ruby Barnhill’s Sophie is composited, though not entirely convincingly. The mismatch recalls another of Spielberg’s misfires, the equally soggy Hook, where there was a tangible disjuncture between a literary children’s character and artificial environment. That’s ironic as Spielberg once lamented the real world limitations of his Neverland set. The BFG and Hook share a sense of whimsy, the same unreality; so much so in fact, that when Barnhill’s character, temporarily abandoned by the titular giant, comes over all melancholy and stares out into the night, there’s the very real fear she might burst into song like Amber Scott once did.

She doesn’t, fortunately, but it’s remarkable that The BFG doesn’t quite work when the filmmaking pedigree seems well-bred for the task. The problem, one realises, is that the older Spielberg, the father of six, has softened when it comes to his entertainments, losing any sense of mischief or cruelty that once slipped into his work. Roald Dahl, on the other hand, was always able to indulge in the grotesque and come out smelling of roses. He was masterful in combining a child’s optimism and sense of wonder, with their penchant for the icky and monstrous. There’s no sense of danger in Spielberg’s mo-capped renderings of Bloodbottler and Fleshlumpeater. They’re just lummoxes. A more grounded rendering, with old fashioned sets and flesh and blood performances, might have added texture, but without a retooling of Mathison’s earnest screenplay, to up the monstrous load, surely the counterpoint to the story’s dream-like elements, the movie would always have struggled to escape the adjectives confected and bland.

Barnhill and pixel-rendered Mark Rylance deserve credit for bringing both of Dahl’s main characters to life; they’re a fine pairing; but what this BFG needed was a little sour to balance the sweet – the kind of menace and off-kilter madness, redolent of Dahl’s prose, that made such a vivid impression on a generation of children. Nicolas Roeg had that very English sense of dry wit and joyous grotesquery in his adaptation of Dahl’s The Witches, which Spielberg misses, perhaps because his American soul can’t intuit the same. And why, you ask, can’t the BFG and Sophie live side by side at the end, as Dahl would have it? It is really a better ending to leave an orphan alone, separated from her new best friend? That leaves a taste in the mouth like a snozzcumber broth.

Certificate: PG for a CGI giant that looks like Jason Flemyng, ditching a perfectly good ending for one that sucks in the best tradition of Tim Burton, and English characters using Americanisms.