Film Review: The Legend of Tarzan 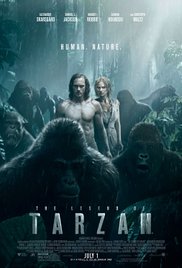 David Yates, director of the later, brooding and joyless instalments of the Harry Potter franchise, takes on another literary icon in this, the umpteenth adaptation of Edgar Rice Burroughs’ story about the English nob brought up by apes and returned to civilisation, who goes back to the jungle when he realises we’re barbarous conquerors of the natural world. Yates’ take is a little different, however, in that it plays like a sequel to a film we haven’t seen; a creative decision prompted by the modern difficulty of how you re-tell an origin story that’s been told a thousand times, not least in Hugh Hudson’s serious Greystoke: The Legend of Tarzan, Lord of the Apes. His solution is to incorporate the bare bones in flashbacks. This enables him and screenwriters Adam Cozad and Craig Brewer to save time and creative thinking about how best to present the Ape Man’s formative years, by having the titular legend established and the world familiar with everything the audience knows about Tarzan – Jane, vines, his almost inhuman strength and agility, and the fact he’s now living the life of an aristocrat in his ancestral mansion.

Joining Tarzan and Jane at the point they’re in denial about how ideologically pure and ecological rich African life was, trying awkwardly to embrace the British Empire’s creature comforts, pun intended, let’s Yates’ riff on the second part of the classic story. This is the return to so-called savage country, and the realisation, though the audience is in no doubt from the offset, that the West, in this case the Slave owning Belgian forces of King Leopold, are raping the natural world – stripping out its riches, butchering its wildlife, and to be part of civilisation is to be complicit in this thinking. As comic sidekick Samuel L. Jackson reminds us, the Americans did the same to the Indians, and his character helped. The point’s hammered home again and again, faithfully adapting Burroughs’ critique, with burnt villages, slaughtered tribesman, deals for diamonds and the gunning down of gorillas. Sure, they’re computer generated animals – more here than Jumanji and only marginally better to look at – but there’s plenty of white man shame to go around, regardless.

All of which is fine, if a little heavy handed, but it’s the rest of the movie that makes Tarzan a bit of a summer oddity. The aforementioned Samuel L. Jackson is there to add a little personality and audience proxy amazement, reprising the role he played opposite Bruce Willis in Die Hard with a Vengeance. But his other job is to try and compensate for the catalogue model presence of muscular lead, Alexander Skarsgård – a man who certainly looks like Tarzan, but has all the human credentials of a CGI ape. Yates, who presumably hired him because he looks like his torso’s bulletproof, surrounds him with quirk, in a bid to fill the charismatic void at the heart of the film. Margot Robbie’s Jane is feisty and impossibly beautiful, Christoph Waltz plies his shtick as the movie’s Belloc (there’s even a reprise of the scene from Raiders where villain and captured love interest dine under duress). But between Jackson’s sidekick duty, Robbie’s sex and Waltz’s understated bastardry, there’s the sense that the elements are, like the visual effects, a little too conspicuous; that it’s all a bit forced. Going with it means embracing moments like Robbie being chased by Rhinos and Skarsgård running with a mega-herd of Wildebeest, but the story such scenes hang on is paper thin.

It doesn’t help that Yates uses the canvas of a big summer eco-blockbuster to experiment with form. Tarzan’s pacing is peculiar because the director insists on big Revenant-style close-ups (he enjoyed it alright) and overcranking his camera during action sequences when, if anything, he should be cutting to the quick. Sure, he’ll argue that these moments of audience contemplation allow us to enjoy nature’s tussle in balletic terms, like a wildlife documentarian slowing down his lion on lion footage so we can appreciate the power and majesty of the animals, but sometimes you just want to see someone smash someone else in the face in real time, and feel the visceral thrill that accompanies that impact. Yates’ movie is all filtered photography, establishing shots of junglescapes and slow motion violence; a film with all the vitality and energy bled out. If only he’d kept it swinging.

Certificate: 12A for a man walking an alligator,  Simon Russell Beale, and Jim Broadbent's Prime Minister.