Film Review: Where to Invade Next 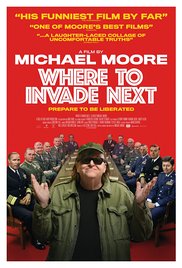 What you take from Michael Moore’s latest polemic will depend on where in the world you are. Supporting the movie’s contention that Americans are pig-ignorant of other cultures due to the tyrannical and retarding hegemony of their own, the film’s been crafted for a strict Stateside audience – innately liberal, Moore hopes, but provincial enough not to have acquired a passport and presumably incurious, as they’ve never asked any questions about how people live in other parts of the globe. Moore’s always preached to the converted of course, the principle reason that Fahrenheit 9/11 failed to change minds in the run up to the 2004 Presidential election, but here he’s managed to coin a peach of a soundbite that sums up his approach – “I’m here to pick the flowers not the weeds”. If Where to Invade Next feels like his most complete film in a while, it’s because he’s cannily adopted a conceit that makes a virtue of this historic flaw.

Moore travels Europe, from Germany to Slovenia, by way of Italy, France, Portugal and Norway, to name but a few, adopting aspects of social policy that could potentially address permanent and fatal errors in American society. In a series of a light-hearted exchanges with factory workers, CEOs, school teachers and ministers, he makes the case, by way of working exemplars, for a social model.

On the menu is progressive taxation, utilitarian education blissfully free of edu-business, a rehabilitative justice system, public services sans corporate interests, enlightened gender politics, free healthcare, and work/life balance supported by employment benefits. Fantasy politics for most Americans, Moore says, but excluding any of the country’s shortcomings – the flowers not the weeds remember – here’s evidence these ideas can and do work, producing well educated kids in Finland, healthy kids in France, productive criminals in Norway with a very low rate of recidivism, powerful women in Iceland, debt free students in Slovenia, and ladies with constitutionally protected reproductive rights in Tunisia.

Conspicuously absent is this critic’s hometown, Great Britain – perhaps because Moore sang our praises in Sicko, but more likely on account of the British disease, namely the slow adoption of American ways of thinking both culturally and in governance. If the movie’s thesis is that the US, the alleged progenitors of these ideas, should embrace their hereditary progressiveness, it’s sobering for British viewers who’ll lament that much of the thinking in evidence has been abandoned in the UK in favour of neoliberal economics, and the same fear and backward conservativism that’s ruined American society. One might say there’s too many Atlanticists and too few Europeans building on England’s green and pleasant. Indeed, Moore’s film has the unintended consequence of crystallising the Brexit debate in the run up to the June 23.

Indeed, Moore’s film has the unintended consequence of crystallising the Brexit debate in the run up to the June 23rd referendum on EU membership. In effect, it’s a reminder that Britain’s in a precarious position – it hero worships an idiot across the water, neglecting the clever kids next door, and may soon stop talking to them altogether.

But this is a movie for Americans, and Moore makes enough pertinent points, though often in a manner that borders on patronising paternalism, to make the exercise worthwhile.

What sticks in the mind are simple things, like an itemised pay slip that shows how your taxes have been spent. Moore notes that an American version would show a whopping 60% goes on military spending. One’s struck by the sight of low income French children in a state school having a one hour gourmet lunch, with dining etiquette and dietary education part of the deal, contrasted with confected gunk in American child farms.

But perhaps Moore lands his hardest punch contrasting Germany’s attitude to its genocidal past with America’s mythologizing tendency. In Deutschland they force their children to face such horrors in order to vouchsafe a progressive future. In America, the past is buried and social inequality and deeply entrenched racism is the punchline in a stand-up comedy routine. One country’s forward looking, the other’s divided and in denial (on this and many other historic holdovers, such as absurdities like gun ownership). If that’s the take away lesson from Moore’s film, it’s a good one, and will hopefully spark some reflection in the few Americans that seek it out; an act that may ironically signal they’re not the audience Moore had in mind.

Certificate: 15 for a Tunisian woman contending American’s are incurious about other cultures and incorrectly citing the internet as an American invention when it was the brainchild of British computer scientist, Tim Berners-Lee, introducing a French Child to Coke, and not finding a single progressive thing to steal from Britain.