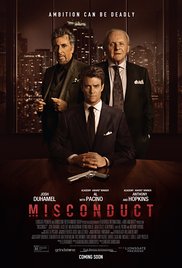 Warning: This review discusses the plot in detail, or tries to.

After a hard day’s think, Misconduct is the kind of movie that critics use to unwind. It’s delightfully, cataclysmically awful; a film from which hatchet swings, jokes and synonyms for terrible, divorced from the demotic in service to haughty grandstanding, flow naturally – if a hatchet swing could flow, which it can’t.

Shintaro Shimosawa’s legal thriller, if that’s what it is, marries asinine, not to mention pretentious direction, with a Crayola doodle of a screenplay. No doubt it looked labyrinthine when outlined, but the maze goes nowhere. The movie’s heavy-handed attempts at wrong-footing the audience send it off balance and flat onto its movie face. In narrative terms, this is the proverbial gun going off in the shooter’s puss, or the bomber who sits down too hard and becomes crimson mash. When you learn the film made £97 in its opening weekend in UK cinemas, though admittedly on just five screens, you reflect that most patrons must have taken a punt. £97 is more than Misconduct deserves.

Long before you’ve had a rummage through the story’s guts, and we’ll return to the plotting shortly, there’s the sense that something is terribly wrong. Did hired P.I Julia Stiles really tell Big Pharma billionaire Anthony Hopkins to remain “calm as ice”, as he goes to meet his girlfriend’s kidnappers? And is she his girlfriend, as she later says when the movie lurches back to ‘One Week Ago’ or his wife, as she was referred to initially? When crooked lawyer Josh Duhamel, calls his creepy and mannered wife Charlotte, “Alice”, presumably thinking of Alice Eve, the Star Trek Into Darkness actress playing her, and determined to commit career suicide, did he misspeak, or is debut director Shintaro Shimosawa playing a strange metafictional game with us, in which the barriers between Hollywood and its audience are blurred; the real and the fictive sutured together? We’re left to wonder if Shimosawa understands that bad takes are supposed to be left out of the final cut, or if his command of the language is so bad he didn’t realise what he’d heard. Did the crew agree to stay silent for a bet, perhaps sensing they were party to a disaster of Room-sized proportions? It’s an absolute fucking mystery.

Then there’s the execution, which smells like an attempt to invest confused material with dramatic and emotional heft, buoyed by the thumping music cues that accompany the footage, but plays like the arthouse wet dream of a film student who got the gig at the last minute when the scheduled helmer fell into a ravine on a cycling holiday.

Shimosawa, we learn, is a fan of smashing cinematic convention. In scenes which a lesser artist, a hack, would frame using a generic two-shot, he instead allows a character to drift off-camera, keeping one in frame and moving the camera slowly, as if undecided on its final position, making use of the five feet of track the production could afford. The effect is that characters you’d be interested in seeing, in exchanges that could be of some interest, remain just out of view – perhaps because they’re easier to dub, facilitating script changes. Occasionally this results in minor amusement, namely one scene in which Eve sits silently on a sofa, listening to talk of her husband’s probable infidelity, while the three characters talking remain standing, their heads cut off. Perhaps Shimosawa saw this is as an unconventional way of placing emphasis on certain characters – a psychological focaliser if you will – but more likely he thought this would add intrigue to otherwise moribund exchanges. He was wrong.

The intervention, from odd composition and discombobulating aural accompaniment, is necessary because Misconduct’s performances are uniformly insulting. If Josh Duhamel’s feckless lawyer is the charisma free heart of the movie, then his support, particularly from Alice Eve, who’s so bad here that she can’t even contrive to be stabbed with any feeling, makes the central relationship a dead zone. But the movie’s notable for having attracted both Anthony Hopkins and Al Pacino, presumably to add heft, only to see them give career worst performances. Hopkins is barely animate in a bit part from which he’s entirely mentally disassociated. Pacino, sporting an out-of-the-box Louisiana drawl, is bored and boring. We’re not shocked to see him blow his brains out at the close, though even here he manages to botch the scene by stumbling (with a bullet in his brain) to the comfort of a nearby seat.

Perhaps Misconduct could have survived being ridden with mistakes and terrible turns – hell, it might have even rode out its conspicuous and reconstructed misogyny, but when added to the incomprehensible conspiracy that drives the story into a brick wall, the audience is asked for too much. Just what the hell is going on in this movie is hard to fathom. At the close, depressed at a half-witted reprise of Presumed Innocent’s climax, you’re asked to unpick it all – a difficult and ultimately self-defeating exercise.

So the story, written by the patron saint of confusion and coincidence, goes something like this: Malin Akerman kidnaps herself to extort money from her billionaire boyfriend who’d made a drug that kills, but also, and for no obvious reason, gives the incriminating data on the scandal to her lawyer ex, Duhamel, who brings it to Pacino, who unbeknownst to Duhamel, is on Hopkins payroll to protect his business from legal challenges like that one.

So to ensure the case doesn’t go elsewhere Pacino proceeds with the civil suit, which Hopkins immediately settles for $300m. But now Pacino hires a hit man to kill Akerman, or something, so she won’t talk. Though she’s already given her hard evidence to the firm, so her testimony would be useless. The matter’s already legally resolved. But she ends up dead anyway, her nipples hard, and Duhamel finds himself in the frame, and now Pacino’s hitman tries to kill him and his wife, while setting him up for the murder by moving Akerman’s body to his apartment, though none of it is necessary. Subsequently Duhamel escapes, kills the hitman, saves his wife, and confronts Pacino, whose identity has been revealed in a careless tip given away by the hitman, ruining the twist for the audience. Pacino, understandably confused, denies everything, but is arrested and kills himself. Duhamel, meanwhile, finds out his mentally ill wife killed Akerman out of jealously, an act that renders the actions of Pacino unfathomable, as the civil suit was settled in collusion with Hopkins, but he does not breakdown, or seem perturbed, rather shrugs his shoulders and the couple pack their bags for another life in a new city.

Anyway, good luck with it.

Certificate: 15 for character/actor confusion, death by motorcyclist with his hand out, and Alice Eve.