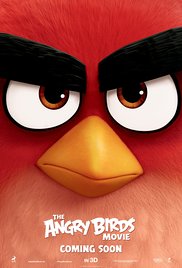 What possible reason could adults have for being angry with Angry Birds, an adaptation of a smart phone game that hit peak zeitgeist around 7 years ago? On first glance, if you relax your eyes, all appears average for a computer animated kids’ movie. There’s anthropomorphised animals, the usual dull messages about lonely outsiders who learn to be accepted for who they are and finally make friends, courage and heroism. There’s pop culture references for adults. It’s the whole package, but said bundle is constituted from bargain basement bits. The problem, you realise, is the conception. For Birds must translate the most popular elements of its source into a coherent narrative. Once the unstoppable force of in-game logic hits the immovable object that is the Pixar template, the result is a pile of miscellany that amount to a rather cynical cash grab. Worse, it’s a piece of ancillary product that’s been disguised as a heart warming comedy adventure for hatchlings. Ticket buying adults shouldn’t just be angry, they should punch the filmmakers.

The competent but uninspired animation aside, Jon Vitti’s script, hamstrung, and no that’s not a pig pun, by a tick list of game elements, makes little sense. Assuming you’ve never played it, you might wonder why all the birds on Bird Island are flightless bar one, why one is a mime, or how they became endowed with certain extraordinary abilities, or why, given they live in an isolated cultural ecosystem, the characters pun products from our world and play our music, or, while we’re here, the visiting pigs – who also reside in a closed culture on another island, regale the wide-eyed birds with odd gifts like giant slingshots, trampolines and, er, an all singing and dancing cowboy show? How the fuck do the pigs know what a cowboy is? They’re green pigs from an island of pigs. Why, in such a culture, would you use trampolines or slingshots? Maybe they picked this stuff up on their seafaring travels you say, after all they have ships. But from whom?

The pigs crave bird eggs for food, but why? When and where did they pick up a taste for them? There are no birds on Pig Island. Vitti must have them steal the eggs to facilitate the birds’ anger and prompt their game-like invasion of the pigs’ territory using the slingshot and trampolines the pigs left behind, but in a world built from scratch, with a team of writers who cared about the story and its internal logic, wouldn’t the pigs just be greedy full stop? Everything’s so specific, so pre-ordained – it’s almost as if these elements were set in stone long before Vitti and his retinue dutifully tried to join the dots.

So Angry Birds is a bit of a shithouse with a strangely xenophobic subtext, and worse, it’s not very funny. When the writers of movies for children get desperate they reach for scatology and Clay Kaytis and Fergal Reilly’s movie is no exception. There’s jokes about mass expulsions, bottoms, urination, and the like, but not much wit. Jason Sudeikis doesn’t make for a particularly endearing hero and he’s barely supported by Josh Gad and Danny McBride. Coincidentally, Gad and Danny is cockney rhyming slang for something rude, not to mention funnier than anything in this middling Pixar wannabe.

Certificate: U for Ugly Storytelling.