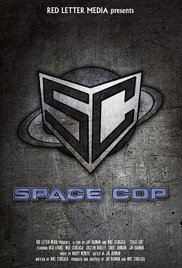 In the interests of transparency, because you’d expect nothing less, I must declare an interest in respect of the review that follows. The Ooh Tray paid a whopping, pocket molesting, $54 USD for the privilege of watching RedLetterMedia’s long gestating passion project; a sci-fi comedy conceived before a series of video essays featuring a geriatric serial killer, and some acerbic movie review shows, gave them online fame and a healthy Patreon income of $12,000 a month.

When we ordered the Blu-Ray, UK customs slapped on an import tariff, the thieving bastards. When we brought this to RLM’s attention, hoping for a note to appear on their website, warning those outside the US that said charge might be added to physical media, so best to warn their destitute following so their greedy governments couldn’t rip them off, we got an echo chamber answer, pointing out we’d been ripped off by our greedy government. Yes, RLM didn’t give a fuck. Now, inverting the usual model for watching movies whereby you pay a pittance to watch a production that cost millions, I’d be paying a fortune to sit through a film with a smaller budget than my overdraft…an overdraft I only needed because of those custom charges.

But with that said at pornographic length, an awful lot of goodwill informs a screening of Space Cop. You want to like it, because you’ve enjoyed the schlubby, schlocky nomedy stylings of the Wisconsin hacks who enjoy the movie chat and punishing bad film marathons you and your friends would have, if only you had friends with similar tastes, or friends. You feel you know internet legend Rich Evans – Mr Malaprop, the man who stole Jack Napier’s laugh, bored cynic and Evans’ bully, Mike Stoklasa, and perma-amused straight man, Jay Bauman. They add sugar to your movie gruel. There used to be a woman too, Jessi, but they probably killed her.

You want to like it and for a time you do. The production has a certain low budget charm; even a variable aesthetic depending on which shots were farmed out to which friends. CGI and Red Dwarf model work from 1989 play side by side; the competent and the shaky, solid visual effects rendered with prosumer software that ubiquity’s made cheap alongside model kit miniatures and props from a teenager’s dress up closet.

Best of the Worst is funny because it shows sincere attempts by the talentless of yesteryear to ape popular movies of the time, usually on a tenth of the budget. RLM’s affection for these non-ironic clusterfucks informs Space Cop but produces a problem. The filmmakers can’t quite decide between knowingly ripping off the rip-offs or spoofing contemporary blockbusters. The aspirational moviesmiths in them want a little modern gloss – digital mattes, some CG animation, while the part who’d like their movie to appear on BTTW: The Next Generation, keep it strictly homemade. You can say that’s maintaining the theme of old meets futuristic, but it’s jarring on the eye. As Jay Bauman might have said, it takes you out of the movie.

You know the skits from Half in the Bag and Best of the Worst, the Plinkett inserts from his feature length trawls through bad celluloid, so Space Cop’s comedy is a familiar blend of low brow toilet humour, self-consciously awful word play, “M&M-vidence”, pratfalls and glibly reworked buddy comedy and sci-fi clichés. It’s not a million space miles from unfortunate 9/11 survivor Seth MacFarlane on a good day, and as such only deserves minimum contempt. But what works in grabs as part of a more stimulating package, feels thin over 102 minutes. Space Cop could have used an hour where the gang broke character and talked about the week’s film releases.

This thing needed a little craft; some style and pacing to maintain the illusion that Space Cop is a movie, not a grab bag of scenes, shot on the fly. You have to respect anyone who gets a film made, except Paul W.S Anderson, especially when it’s been done by a small group with limited resources. But given RLM had all the time they wanted to prepare Space Cop, time to write, re-write and storyboard, it’s curious the finished product shows no evolution from the rough and ready camcorder efforts of yesteryear, the kind of movies you used to make in your friend’s house when their parents were away, meeting their secret second families.

The movie’s flat, not because we don’t enjoy Rich Evans channelling Kurt Russell’s Snake Plissken, or Stoklasa’s Cary Grant, but because it’s just one fucking thing after another, the footage edited in homage to the first disastrous cut of Star Wars. You can take an obsession with Lucasfilm too far, you know.

The finished flick has its moments – not least a very funny chase scene in which Evans pursues the future killer of his dead wife, a bespectacled ten year old boy on his bike – but you’re left with the sense that it could and should have been more; that despite the constraints, the troupe were capable of greater wit, craft, and less recourse to the kind of lazy slapstick and fat jokes that RLM, with their review hats on, rightly mock in the patronising work of others; work that assumes a certain infantilism in the audience. Hollywood could remake Space Cop, replace Rich Evans with Kevin James, and it would probably be 80% the same. The missing 20%? Rich Evans.

Does that make RLM hypocrites? You could put it down to cognitive dissonance; an ironic appreciation for the stuff the so-called masses profess to love because they don’t know any better. Producing shit on purpose instead of it being a by-product of cinematic illiteracy (see Tommy Wiseau) is an easy way for clever people to celebrate their wit without using it. But what’s the point, you ask, in sitting through so many terrible movies, if you don’t learn how to make better ones? As a product of an age when media’s long enjoyed eating itself, I appreciated Space Cop’s nods to Star Trek, The Phantom Menace, even Happy Days for fuck’s sake, but a sop to the audience’s brain would have been even better.