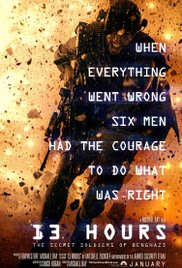 If you’d been locked in a fight for your life, a battle in which many of your closest friends perished, would you want Michael Bay to dramatise your story? For most of us the answer would be a resounding, impolite “no”, but it’s different if you’re a former American covert mercenary. In that instance you’d be cheered by the choice. Who does simple, bread and butter jingoism like Bay? Who loads each and every one of his movies with the kind of unreconstructed misogyny, intensity, testosterone and glibness, that a group of muscle men, loaded with high-tech weapons, and bound together in a largely lady-free environment, with a sociopathic predilection for discriminate violence, will instinctively relate to? Yes, if you’re a military man, Bay’s the perfect helmsman.

But what about the rest of us? 13 Hours is the true, that is to say, patterned on actual events, story of a group of CIA sponsored shadowmen, forced to defend an under-resourced diplomatic outpost, then later their own compound, from a group of bloodthirsty Libyan insurgents. The actual siege took place on the symbolic date of September 11th 2012, and many died in the scrappy, piecemeal battle that followed. If you’re hoping to understand the nuances of the political backdrop, or indeed the precise motivation for the attack, then Bay’s film is, at best, a junior school-level primer. There’s a few expository captions and a bit of sub-Homeland espionage, but 13 Hours raison d’etre is to celebrate the heroism, fortitude, patriotism and, yes, innate humanity, of American soldiers. Not only that, it’s here to remind you about the primacy of American life. Lives are in danger, you’re reminded throughout, American lives, and that makes what’s happening rather serious.

Yet, you say, surely this isn’t a movie that’s going to deny the context informing the Libyans’ actions and their human credentials? No, not entirely. Bay, conscious that token tips of his baseball cap are necessary if the film’s to have any integrity at all, has a few background foreigners talk about fighting for their country, and he’s good enough to show some crying women mourn fallen natives at the close, but the indigenous gun-crazed death squads remain an elusive, imponderable and therefore terrifying other, that we don’t spend any time with, and whose families we don’t get to hear about every ten minutes, like their personable American counterparts. There’s no lingering on Libyan corpses, or the terrible injuries inflicted on their numbers by American weapons, and we certainly don’t have touching scenes with their wives and precious kids, with talk of more on the way. But did we come here to talk about terrorists and thugs, or about heroes? Let’s not get distracted.

The danger with a movie like 13 Hours is that it becomes a sausage fest; that any women who feature are merely ornamental. But relax, kids, Michael’s on the case. Alexia Barlier, who stars as the CIA’s women in Benghazi, is celebrated. The wind blows through her hair, she’s interrupted by every male character, told to shut up and cover her head in one scene, and given as much as 50 words of dialogue. Bay, you feel, is improving when it comes to gender representation, and at this rate will be depicting both sexes on equal terms by 2150.

But if 13 Hours must ultimately be deemed a failure, it’s because it’s not a particularly efficient thriller or action flick. Bay’s pacing is atrocious. Instead of the incremental building of tension, we have messy grabs of Benghazi violence shot on night-friendly DV for that ugly news aesthetic, punctuated by botched and often sentimental attempts at character development. It’s almost as if this is war reconstructed by an idiot – hard to accept from the man who brought us the gritty realism and respect for biography of Pain & Gain.

Certificate: 15 for digital photography, talk of rubbing genitals, and wringing a few crocodile tears from the desecration of the American flag.