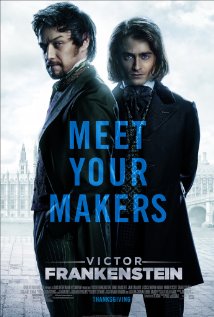 If a madman ever digs up Mary Shelley, author of Frankenstein, and reanimates her remains, it’s likely she’ll turn homicidal once she’s seen the glut of movie spin-offs from her classic creation. Imagine finely crafting your masterwork, dying from a brain tumour, being resurrected, then shown the recent I, Frankenstein, a fantasy sequel, or indeed Paul McGuigan’s prequel-of-sorts, Victor Frankenstein – a film that cements the suspicion that storytellers should work on their own ideas instead of riffing off someone else’s. Thank goodness Mary Shelley’s dead, the shock might have killed her. Again.

Victor’s a curious collaboration between floppy haired web irritant and American Ultra writer, Max Landis with the makers of the BBC’s Sherlock; potentially as dark and ill-advised as Frankenstein and Igor. Given that Landis had no part to play in McGuigan and Steven Moffat’s Conan Doyle update, it’s strange, though surely not coincidental, that the son of John’s screenplay replicates the Cumberbatch show’s hyperactive, bromantic, fan fiction approach with terrifying fidelity. As you’d expect from the director who gave those detective specials their gloss and visual dynamism, the composition and pace are equally evocative. Yet the problems with this approach remain. It’s hard to take the story’s dramatic beats seriously when there’s such a broad, comic tone to proceedings, and in a show where all the emphasis is on presentation and audience-friendly eccentricity, logic can go hang.

Still, for fans of breezy, inconsequently entertainment, there’s parts to enjoy. James McAvoy is a suitably wide-eyed, egomaniacal and tad unhinged mad scientist, lending the movie much needed energy and exuberance. Andrew Scott, playing the God fearing detective on Frankenstein’s case, adds a little quiet malevolence. Couple those with lashings of comic book Victoriana and you’ve got an attractive diversion for period fans, only undermined for a modern audience by the ornamental lady-stylings of Jessica Brown Findlay’s off-the-shelf love interest and of course, Daniel Radcliffe, whose flat presence waters everything down.

We’re never too confident that Landis and McGuigan can hold us close for the duration and our fears are soon confirmed. The first flamboyant hour does a reasonable job of setting up the familiar master and apprentice dynamic that’s characterised many a Franken-flick, and there’s even a Franken-chimp for good measure. But thereafter the movie loses its shape, unable to adequately incorporate Robin Pearce’s evil rich patron, Scott’s moral crusade, Frankenstein’s Daddy issues and the guilt over his dead brother, into a story that binds. By the time we get to the overwrought, but perhaps suitably shlock-heavy climax, we’ve long since stop caring about any of the characters. Shelley might have said that the finished movie looks like it was hastily stitched together from many sources and this would strike us as an original observation as her vintage would mean it had yet to become a Franken-cliché but I’m not going to finish with it for that reason.

Certificate: 12A for Daniel Radcliffe, an action packed escape from the circus, and Charles Dance's wasted time.