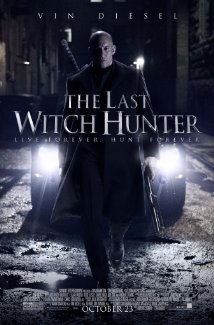 Vin Diesel’s fantasy vehicle, a distant and unloved cousin of New York based adventures Highlander and Ghostbusters, is like a gash in your guts covered with a makeshift plastic bag dressing. The plot just about holds up but there’s the imposition of real world tension throughout – the sense that the movie’s disparate elements could burst through and unravel at any moment. You can almost feel director Breck Eisner straining to hold it together. And behind it all, behind the lore and the story’s various contortions, there’s the impress of a movie revised in production and patched together in late night writers’ meetings, with the coffee and fast food budget coming out of Eisner’s pocket.

The movie has a scrappy quality to it; a film that appears to be backtracking on footage already shot in a bid to keep the show on the road. It starts in traditional misogynist witch movie territory, with a gaggle of gals responsible for pestilence and familial destruction. Later, in the present day, Vin befriends a young witch bar owner who gives him the opportunity to say that Salem was a miscarriage of justice and not all witches are malevolent, though he was unquestionably an original member of the superstitious tribe assembled to kill first and ask questions later.

Vin’s confessor and sidekick is initially Michael Caine, but quick as a flash, perhaps because the 82 year-old didn’t fancy a gruelling film schedule, he’s quickly replaced by Elijah Wood, who’s so slight and inconsequential that he soon makes way for twentysomething witch and target audience proxy, Rose Leslie. Caine and Wood aren’t forgotten of course, the plot’s constructed so the former can sleep through the second act and the latter can act as a human rug pull in the third, but the unsettled narrative plays like the consequence of several drafts laid on top of one another. In an overstuffed flick, more coherence and less firefighting on the screenwriters’ part would have been welcome.

Yet Witch Hunter isn’t a total bust, even if its best scenes remind you of better movies. There’s some nice ideas on how present day witch culture has developed, constrained by a law that forbids practicing on humans, and a slight, if underdeveloped attempt, at showing how hero Vin appears to the magic community – a fascist executioner as it turns out. Had the movie spent a little more time teasing out the tension between the man charged with locking up the broomstick brigade and Rose Leslie’s enchantress, and had the action been more fluid and less frenzied, then Eisner’s flick might have had real legs. As it stands it’s just a cavalcade of weird and pixels, with a lot of convenience and anti-environmentalism chucked in. Disposable, oddball fun.