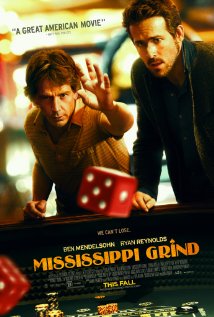 Anna Boden and Ryan Fleck’s gambling flick harks back to the intimate, low-key dramas of the ‘70s in which flawed and fully rounded characters with a tragic dimension, were peeled before our very eyes – the kind of movie they might have given to Bob Rafelson a generation ago. Ben Mendelsohn and Ryan Reynolds star as a gambling addict and a drifter who find each other in an Iowa poker room, then hit the road to play in a New Orleans tournament. That’s the spine for a grounded, often funny and highly affecting character study that paints a complexed relationship between two dreamers, neither of whom are honest with themselves or the other.

Like the best road movies, we get to know the travellers on their journey, and what we find out is reassuringly conflicted. Mendelsohn’s terrific as the bad bet, estranged from his family and up to his neck with local loan sharks, who’s nevertheless addicted to the thrill that accompanies high risk gambling. Reynolds’ role seems simpler at first. He’s a charmer and a womaniser, content to go where he will and seemingly indifferent to winning. But soon a different movie emerges; a story of two men trapped in lives bereft of substance and intimacy, who crave the escapism of the tables and the promise of the big win.

The tragedy for both, we come to realise, is that even if they achieve their dream they’ll contrive to sabotage it, as the chase is king. Winning and losing it all is the gambler’s cycle, we’re told, a loop from which it’s near impossible to escape. Sienna Miller and Analeigh Tipton, playing the love interests the pair court en route, underline the point. They’re prostitutes, dependent on the cash, trapped by the lifestyle. The scene in which Reynolds begs Miller to go with them, only to be asked, “shall I bring condoms, or are you going to pay my way?” is mournful for being met by a defeated silence. This is a movie for anyone who feels like a passenger in their own life.

The unglamorous backdrops – two bit road stops and dingy bars, add to the sense of life played out on the margins. This is Middle America – boxed in and a little desperate. The story’s driven by the hope that both men may find something better, more substantive, but Boden and Fleck know better than to cheat the audience with a fairy tale ending or 11th hour conversion to respectability and responsibility. Instead we’re given a fleeting feeling of adulation – the one all gambler’s crave, the thrill of the big win, tempered the knowledge that Mendelsohn and Reynolds will never be satisfied with that single hit – that Mendelsohn’s six year-old daughter isn’t going to benefit from her Dad’s windfall. The titular grind will go on until those dreams are dust.

Certificate: 15 for bad debts, ordering a cheese burger at a steak and lobster restaurant, and Sienna Miller.