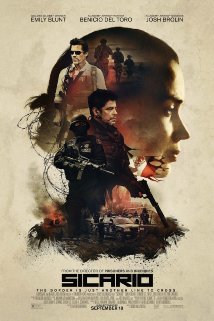 The War on Idealism

Denis Villeneuve’s slow-burn thriller about America’s war on drugs, or rather the Mexican cartels flooding the market, is a considered exercise in carefully cultivated suspense and realpolitik. Thematically it’s a kind of horror movie, with Emily Blunt as a SWAT agent recruited to the task force that hopes to cut the head off the snake, an insidious, invisible enemy, coming to realise that no absolute victory is possible; that a managed stalemate is the best that can hoped for. It’s a world where life is cheap, with institutionalised corruption and brutal reprisals. Blunt’s our route into this world; we learn as she learns, the apparent conclusion being there are no absolute good guys, just firefighters who’ve made their peace with the flames.

There’s been many movies that have dealt with the inhumanity of the cartels, most recently Oliver Stone’s Savages, but Sicario’s altogether more ambitious; it wants to explore the effect on protagonist and antagonist alike – the agents, the heads of the Cartels and, refreshingly, the little people, in this case a Mexican beat cop whose drug running has consequences for a wife and son we meet in vignettes as the story unfolds.

The economy of these scenes, culminating in the movie’s ominous coda, showcases the benefit of Villeneuve’s approach: understatement. Sicario isn’t a movie that needs to indulge in violence or shootouts for cheap thrills; the former is sporadic, realist and shocking, the latter sparing. Instead there’s long approaches to theatres of conflict, motorcades through warzones with the cartel’s victims hanging from flyovers and Blunt pensive in the passenger seat. The cumulative effect is far more compelling that cheap histrionics. Like Kathryn Bigelow’s Zero Dark Thirty, the emphasis is on presenting a grounded procedural, and a sober assessment of moral compromise and human cost.

Ultimately Sicario’s a nasty, though never exploitative drama (forever cutting away at the right moment), artfully shot by Roger Deakins and infused with dread, thanks to a moody score by Jóhann Jóhannsson. It’s a story designed to crush your idealism and open your eyes; objectives resoundingly achieved. Benicio Del Toro’s mysterious enforcer, later revealed to be a rival cartel man with a personal vendetta, speaks to the movie’s world weary pragmatism. You’re left thankful that you live in a politically stable country with no lawless backwater on your border, unless of course you do, in which case you are, as the film makes crystal clear, fucked.