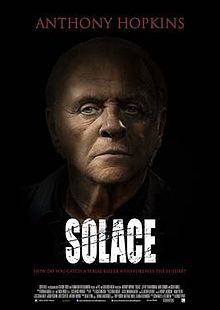 Warning: This review discusses the plot. You may wish to touch the poster and project yourself into a future where you’ve seen this title, before reading on.

Solace is a movie that was finished two years ago and has been languishing in a vault ever since. Usually this signals embarrassment on the part of all concerned, and that’s a worry given what does find a distributor and plum release slot. Still unseen by fragile US audience, Afonso Poyart’s oddball thriller has nevertheless broken free and slid unnoticed into UK cinemas.

Once a sequel to Se7en that would have seen Morgan Freeman’s Detective Somerset inexplicably develop hitherto unknown (or consciously repressed) clairvoyant abilities, the script has fortunately been retooled and now stars Anthony Hopkins as an X-files –like FBI troubleshooter who can peer into the past. He’s up against Colin Farrell, a serial killer who can see the future. You’re already wondering if the movie can possibly work, and you’re right to, but the good news is that despite its shaky premise, Solace is an entertaining slab of dour schlock…provided you don’t think about it too hard.

Perhaps aware that Sean Bailey and Ted Griffin’s script is somewhat deficient in the internal logic and plausibility department, Poyart attempts to paper over the cracks with artsy, film school direction. This is the kind of movie that’s so heavily stylised one wouldn’t be surprised to learn the crew had been upholstered to blend into the sets.

Having decided to turn it up to 11, Poyart can’t quite switch off, even in scenes in which we’d have welcomed some low-key lensing by way of dramatic counterpoint to the tricksy, post-production inflected setpieces. Is it really necessary to film a simple kitchen conversation between Hopkins and Brad Pitt replacement, Abbie Cornish, using a handheld camera? Should we feel irritated watching a conversation between two characters? But if you’re thinking about how great a steadycam would have been, you’re not concentrating on the dialogue, which is workmanlike for the most part. Only Hopkins’ aloof, authoritative and monotone delivery lends his scenes any gravitas. He’s a great choice for the reluctant psy-tech, as we can believe his pain and loneliness, even if we can’t buy into anything he’s involved with.

Said plot holes begin to compound on one another once Farrell enters the scene, late and Kevin Spacey-like into the second act. If Farrell’s gift, an overdeveloped sense of intuition as Hopkins calls it, mirrors that of the protagonist, then surely, we say, it should work on similar principles? But whereas Hopkins requires touch, or some material connection with the deceased to see what has been and will be, Farrell selects his victims, those destined to die of terminal illnesses, apparently by psychic selection alone. We never fully understand how Farrell could have met or indeed have had anything to do with the people he chooses, so are left scratching our heads.

It could be the key line of dialogue was excised in the final, desperate edit, but it’s more likely that in the filmmakers’ desperation to roll out that hoary old cliché of the hunter and hunted with a natural affinity/shared pain, they simply forgot to make their gifts uniform. One scene that established Farrell’s credentials with his victims, like a hospital orderly who comes into contact with various patients or the lackey who processes urine samples down the lab, would have been enough to make Solace tick over. The movie, as finished, leaves us entertained but confused – the kind of flick where you have to take things on trust because the brains responsible just be couldn’t be fucked to fix it. Still, glossy fun while it lasts.