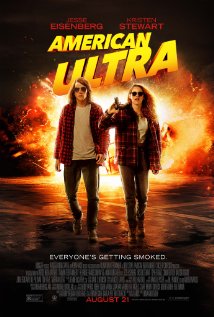 Love and other Drugs

The thing about a joke, particularly one stretched across an entire movie, is that is has to delivered well. Timing is everything. Watching Nima Nourizadeh’s American Ultra, from a screenplay by Chronicle’s Max Landis, there’s a sense that the premise on paper – Jason Bourne’s a stoner in a two-bit town with a job at a cash and carry who’s activated by a sympathetic agent when the CIA decide to terminate him – was a lot funnier on paper. Those who saw Jesse Eisenberg and Kristen Stewart in Adventureland will know they have an easy chemistry that’s much in evidence here, but they can’t quite get the movie into gear. What, you begin to ask, is the problem? And the tragedy is that you have the space to ponder it. Nourizadeh has a zeal for cartoony, bloody violence, if not the quite enough dedication to orchestrating it with comparable zeal, but he can’t sell the humour. What was required, perhaps, was something like Quentin Tarantino’s virtuosity when marrying the profane with the octane. Ultra has plenty of kook but it botches comic scene after comic scene.

In some of those scenes it’s clear that Landis’s script is deficient. A typical exchange, between Connie Britton’s covert programme director and hawkish agency boss, Topher Grace, tells the story. Britton accuses Grace of being incompetent and suggests the only person who’d think otherwise was Daffy Duck. This leftfield pop cultural reference, a clunking punchline, is part and parcel of Ultra’s underwritten shtick. Time and again, in scenes that rely on inventive sniping or the juxtaposition of confused waster and thriller action to work, the scenes feel long or the dialogue forced. Nourizadeh can’t find the film’s rhythm or give it a signature style, and consequently American Ultra keeps the audience at arm’s length, interested but underwhelmed.

The movie’s not strictly a write-off. Eisenberg is almost sweet as the waster-cum-trained killer (though he begins to resemble a Neanderthal as he sustains more and more facial injuries), and his partnership with Stewart as his responsible girlfriend, has an endearing quality. The violence, which is squib heavy, is designed to mirror the kind of comic book brutality beloved of Eisenberg’s delinquent, and it gives the movie a bit of colour. But ultimately American Ultra fails because it plays like a well-planned movie handed to a stoner. The timing’s off, scenes are flat. The feeling something’s missing becomes tangible. Ironically weedhead’s will probably get off on the brutality and jokes about fucking monkeys, but the rest of us will say that both writer and director sold a solid premise short.