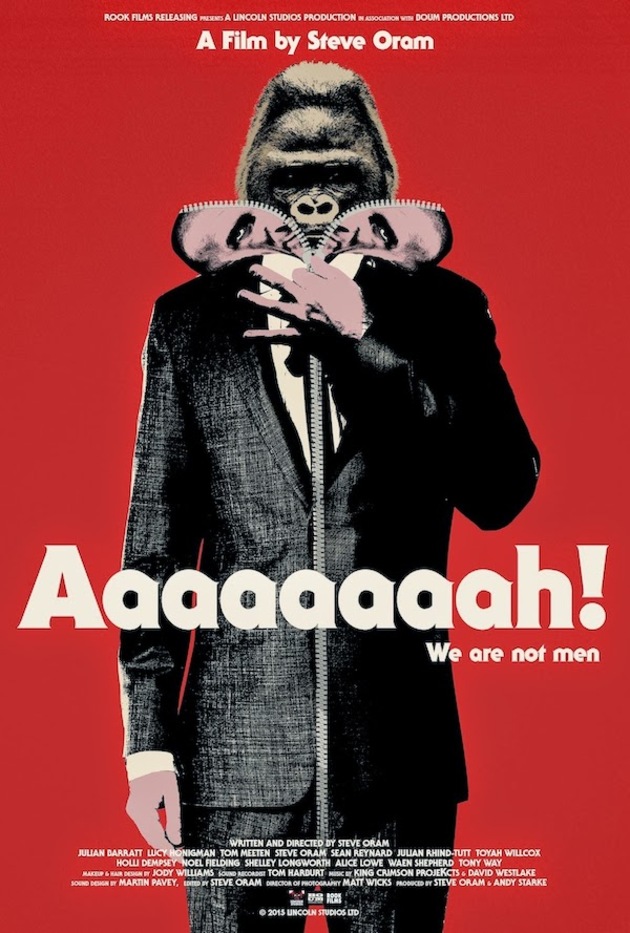 Note: An ape translation of this review is available.

Were it not for an ingenious comic conceit, Steve Oram’s highly original comic melodrama would be a familiar story. A man splits from his wife, meets a woman at a party, trapped in an unhappy relationship, and the two decide to make a run for it and get married, returning to the home and kicking out the ineffectual boyfriend. But in Aaaaaaaah!‘s universe, human language and instinct haven’t evolved beyond that of primates, and consequently you have an eccentric and often brutally honest comedy that lays bare the base instincts and absurd animal behaviour that fundamentally characterises human relationships.

In some parts of the real Britain man may have learned to curb aggression, mark territory without urinating on it, and settle relationship disputes with rival males without ripping off their arms, but in Oram’s movie that’s still how we do business. As you watch a game cast suffer all manner of indignities as they channel their inner ape, you’re struck by the innate truth of the setups. It’s a mesmerising parallel world in which all intellectual pretence and identity politics have been stripped out, leaving just alpha males and their betas, women impressed by mating dances and acts of possessive violence, regimented social structures, and family groups, forever subject to hostile takeovers from the next, highly sexed alpha male. Ironically, for such a distinct production, Oram’s film may be one of the most reactionary ever made.

Sure, it’s a one joke movie, but the incongruity of this primal behaviour in a modern setting – a world in which we still go shopping, watch TV and listen to music, makes for a curious, and often brutally funny spectacle. In applying primal behaviour to modern toss, Oram underlines the animal urges that inform the way we live, though the comedy demands that all restraint be removed. A pervert shop manager may pull an attractive shoplifter into his back office and use the power to vie for sex in real life, but without the chat that would inform the real world scenario, there’s just frenzied masturbation – the literal getting off on a position of dominance. In this way the movie reflects our ridiculous society back to us, sans the bullshit.

If there’s a downside to having all our enlightened proxies for the laws of the jungle removed, it’s having a window on a society in which all the nuance and self-awareness that makes the human race special is notably absent; the kind that made this movie, with its retro 4:3 framing, documentary handheld camerawork, and faux dramatic zooms on character’s eyes, possible. Art in this universe, lacks subtlety you might say, though I confess that the featured sitcom, with roars of laughter being mined from a man trying different chairs in a pub, seemed to me about as funny as Mrs Brown’s Boys. Maybe funnier.

Lost too, inevitably, is the wonderful comic potential in language. When you learn that Oram sold the movie to his cast with an allegedly hilarious English language script, there’s a measure of regret that we’ll never get to hear the dialogue that attracted such a fine cast of comic actors (and a great Toyah Wilcox). Still, Aaaaaaaaah! is a very fine, effectively silent movie, despite its self-imposed limitations. That a degree of comic sophistication and social comment is apparent throughout is testament to a film executed with great skill and irreverent wit.