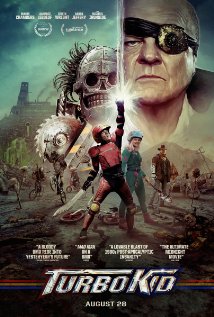 Ooh Trayers will long memories will recognise the name Jason Eisener on the credits of François Simard, Anouk Whissell, and Yoann-Karl Whissell (yes, three directors), post-apocalyptic ‘80s throwback. Like Eisener’s Hobo with a Shotgun, Turbo Kid is a conscious bolt-on to a canon of low-budget exploitation movies, made when belts were tight but concepts high. Eisener’s movie pretended the ‘90s and Noughties never happened, reviving the lost art of economy kitsch.

Of course the intervening years had occurred, so Hobo doubled as a postmodern pastiche. Kid operates on the same level, retro-synth score, practical gore and ‘80’s artefacts dutifully in place, like a cinematic museum exhibit. It’s even audacious enough to scale Mount Meta and be set in the unimaginable future of 1997. Here, says the Canadian trio, is a movie that could have been realised thirty years ago, were it not for minor CG embellishments, and it would be the same, but it wouldn’t of course – they’d be no nostalgia to mine and no developments in genre filmmaking to kick against. 1985’s critics would see Turbo Kid as a sweetly violent Mad Max rip-off with plenty of humour and heart, and that’s about it.

In 2015 it’s not much more than that, but to humour and heart one could add buckets of retrograde invention; a lovingly crafted period replica into which a great deal of thought has been invested, not least on the absurd comic details and character beats that elevate Kid above the thousand and one genre tributes that fill DVD shelves. Who’d have believed that the relationship between would-be super hero and cyclist, Munro Chambers and his wide-eyed friend, Laurence Leboeuf, would be so affecting, or that you could gain so much pleasure from watching a woman beat a man with a gnome tapped to a stick? But Kid manages to surprise, despite its pop-cultural furnishings, using a winning combination of imaginatively executed cartoon violence and child-like wonder. The low-rent charm (gangs on peddle bikes) and deadpan delivery adds to the sense that this is the best movie you’ve long forgotten, your favourite sweet from childhood.

Ultimately it’s that combination of playing it straight, the winks to the audience thankfully few, and keeping it light, amongst the dismembered bodies and bloody fights, that makes Turbo Kid an honest genre offering, not just an exercise in nostalgia. Simard and the Whissels, which sounds like a futuristic band, remember that whatever else they’re making – pastiche, museum piece, whatever else you might call it – Kid is a movie first and foremost and has to work for that rare audience member who’s been frozen for three decades and awoke last week to find they’d only just got round to letting George Miller back into the wild. One can lament that talented filmmakers aren’t looking to the future and thinking about what comes next in genre filmmaking, but in the meantime Turbo Kid’s a jolly movie to be going on with.