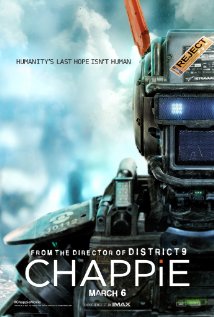 It’s a pity that Chappie plays like a sci-fi mix tape. It’s highly derivative, not just of Neil Blomkamp’s own District 9, that dropped a more fortunate citizen of Johannesburg into the ghetto then contrived to transform them into the very thing they’d once subordinated, but also old genre mainstays like Robocop and Short Circuit. All of which means that invidious comparisons will be made and Blomkamp’s film, toying with a few meaty ideas, will be dismissed as a tribute act.

Not that the director does much to bring them to the fore, you understand. Chappie’s a scrappy affair, its heart and plot mechanics fused together like the poor robot’s battery and chassis. Somewhere, in the interstice between the violent histrionics and child-like droid looking to bond with his human captors/family, a tonal contrast that jars, is a film about humanity becoming more machine-like, both in its embracing of technological adds-ons and thinking, and the implications of this for social inequality; techno-elites and those without moving further apart. In a criminal toilet like South Africa’s capital, the heart of a highly stratified society, it’s a contrast readymade, but the potential for tech to both pry apart or ultimate level society (by turning us all into drones no longer dependent on old resources) is lost in the scramble to tell the story, drowned out by noise.

As we’ve come to expect from Blomkamp, it’s a stylish and assured movie from a technical point of view, that benefits from a thumping Hans Zimmer electronic score and colourful performances, not least from Die Antwoord rapper, Ninja, but at its heart there’s a void – one that threatens the entire enterprise, and that’s Chappie himself: one of the most irritating leads in recent memory.

It was clearly Blomkamp’s hope that Chappie would be an endearing character whose child-like naivety and curiosity would act as a vivid contrast to the inhumanity and self-interest all around him. Unfortunately the decision to keep him infantile, his cognitive development curiously stalling at teen level, following a promising start in which he learnt basic language skills in two minutes (it takes a human baby 3 months), turns him into a baby-talk spouting irritant, compounded by the embarrassing ghetto speak he inherits from his gangster rolemodels.

Having spent most of the movie bumbling, idiotic and talking like a five year old, reminding us of a mechanised Jar Jar Binks (the character design underlines the point with his awkward walk and rabbit ears, making us wonder if Blomkamp isn’t a closet Phantom Menace fan), we’re then asked to believe he’d discover the secret of transferring human consciousness into a robot body. In other words, Chappie graduates from guns, theft and lofty spiritual talk to the single greatest innovation in the history of computer science, and this with just minimal exposure to Dev Patel’s boy genius (unfortunate casting as it recalls Fisher Stevens’ turn in the aforementioned ‘80’s robot develops consciousness blockbuster).

To say Chappie damages Chappie is not underselling it. He’s one dislikable character amongst many, but the only one we’re asked to care about and root for unconditionally. As the film progresses, admittedly at pace, later scenes involving the emotionally stunted robot-child tip into mawkishness, some playing like parodies of bad sci-fi movies. We’re left in the curious position of enjoying the film’s suitably grimy, industrial aesthetic and its kinetic setpieces, while feeling next to nothing for the humans that furnish the dystopia. If Blomkamp’s going to helm a successful Alien sequel, he’s going to have to get a firm grip on plot and characterisation, so complimenting, rather than working against, his demonstrable technical ability.

Certificate: 15 for Phantom Menace invocation, pick up shots with bad wigs, and an Ed209 called "The Moose".