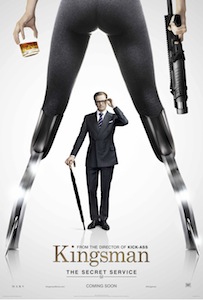 From its poster, a gleeful pastiche of Moore-era Bond movie, For Your Eyes Only, to Colin Firth’s on screen preference for outlandish spy movies, it’s clear that Matthew Vaughn’s goal with Kingsman: The Secret Service is to have fun, the kind of fun we used to have in the pre-9/11, pre-post modern world, when it wasn’t necessary to temper fantasy with realism and a heightened reality was presented without apology. Vaughn’s comic book adaptation has gadgets, cartoon violence and a villain with a lisp and a baseball cap. Casino Royale it ain’t. But nor is quite as much fun as the old Bond movies both it and the source comic book are modeled on, and the reason for that is the main protagonist is Taron Egerton’s boorish teenager.

Vaughn and Kick-Ass collaborator Jane Goldman rationalise the movie’s focus on the young buck by playing the genre reinvention card, for throwback though it is, Kingsman has some modern pretensions after all. So hero Eggsy rehabilitates the council estate hoody, the kind of wayward underclassmate who never gets so much as a cameo in the world of high-class espionage. The plight of his mother, EastEnders’ Samantha Womack, shackled to a thuggish boyfriend acts as a subplot. The boy battles snobbery in his training, felling nobs as he goes. It’s all very progressive, Egerton’s working class hero credentials underscored by Michael’s Caine’s turn as the cockney spy’s Dorian Grey painting, but with the leading man a charisma free zone, we’re dreading the moment we’re being groomed for; the handover from Firth’s debonair spy to his heir presumptive.

Vaughn and Goldman hold out for as long as they can, two full acts to be precise, but once the switch is flipped Kingsman begins to feel like a young adult franchise, albeit with more sex and violence, and the flaw in the scheme’s laid bare: young heroes make lousy audience proxies. Any teen worth their sort would surely want to be Colin Firth and if they wouldn’t they should.

Technically there’s little to fault about Kingsman. It’s curiously bloodless, extending to the weird substitution of purple mushroom clouds in place of exploded brain and sinew, but the action’s staged with aplomb, it’s blissfully tongue in cheek, and the pace never flags. If the movie weren’t so dependent on the gravitas of its adult leads and so resoundingly impoverished without them, then the prospect of sequels would be enough to awaken anyone’s inner teen. As it is, the prospect of another movie in the company of one is enough to make you grateful for the joyful adventure Vaughn’s made while hoping he’ll be good enough to leave it at that.

Certificate: 15 for Samantha Womack being a danger to kids...again, McDonalds product placement disguised as a joke, and a dull teen.