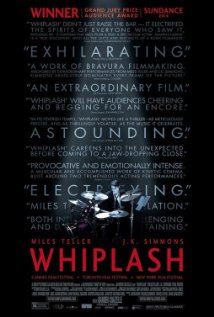 For J.K. Simmons’ disciplinarian, drill-instructor shaming music tutor, there are no two words in the English language worse than “good job”. Good job, as a highly tasked, greatness chasing Miles Teller discovers, is venerating mediocrity; it’s a patronising slap on the back for those unwilling to push themselves further; a rubber stamp from a world divided into comfort zones inhabited by content, middling actors who produce nothing of note, filling culture with their half-baked, that’ll do, I’m reasonably happy with it, are you sure you don’t want another take Mr Eastwood, so so-ables.

Consequently one feels a lot of discomfort watching Damien Chazelle’s movie. It’s a film about and characterised by, excellence; a production driven by the same standards of pace and exactitude advocated by its sadistic mouthpiece. Thematically resolute, meticulously composed and notable for bravura editing from Tom Cross, Whiplash is as close to a perfect film as you’re likely to see. Try listing its deficiencies and feel your mouth go dry and brain fog over.

One can point to the captivating performances from Miller and Simmons and have a great time doing so, but Chazelle’s flick really scores by having the courage to push its potential reaching manifesto all the way, and in so doing, excising the specious guff, the moral and ideological imposition, that blights a million and one similar dream chasing movies.

Exhibit A, Teller’s pursuit of student and part-time cinema usher Melissa Benoist. In most movies this tentative relationship would form the so-called heart of the movie and the trajectory would be clear and inescapable. Simmons pushes Teller to extremes, he neglects his sweetheart, the audience cries foul and finally, belatedly, Teller realises what’s important, tells his teacher where to get off and rushes to Benoist’s arms, hoping to catch her before she gets on a plane to London or some such. Not a bit of it. In a moment of epiphanous honesty, with Teller exhibiting the kind of self-awareness so many of us wished we once possessed but didn’t, he cuts the relationship short, conscious that the commitment and all-consuming obsession that characterises the highest achievers is incompatible with another human’s boorish emotional needs. That’s right, no breaking off drumming practice to cuddle up in front of a Friends marathon for the man hoping to emulate the likes of Buddy Rich and Charlie Parker.

Later, with Teller down and vulnerable, he contacts Benoist in a moment of weakness only to find that his nice but dull ex has already moved on, and not only that has a boyfriend indifference to jazz. An audience, robbed of their romantic reconciliation, is administered a collective slap to the face and a reminder that Whiplash isn’t playing at this self-sacrifice for greatness thing; Teller’s art is all that matters. The moment we’re building toward, the point where raw talent becomes cultivated artistry, cannot and must not be disrupted. Story and story design are one.

That Whiplash achieves that greatness, in a magnificently edited final drum solo, reaching its peak performance alongside the in-story protagonist, is testament to the good judgement of all concerned. Chazelle’s crafted a movie resplendent with flawed characters, ambiguous motivation, conceptual clarity and lyrical beauty. You can’t have a movie that demands the best falling short and Whiplash doesn’t. Instead it places a looking class on genius; hard work and sacrifice in pursuit of immortality, a journey so few of us are willing to make. The movie asks, why? You’re left in the dark, uncomfortable, scrambling for an answer.

Certificate: 15 for blood on cymbals, leaving the scene of an accident, and talking in the cinema.