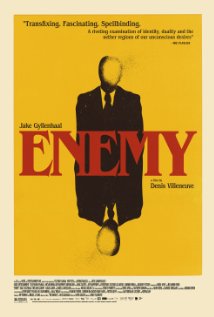 Warning: This review reveals what in all likelihood is the film’s ending. Please watch this title before giving in to your dark compulsion to read on.

Enemy might just be the film of the year. Not this year, you understand, but 2013, when it was made. Director Denis Villeneuve is like an author who only got his obscure first novel published once he’d had a mainstream hit. Those who were assured by his commanding direction in Prisoners will find it in further evidence here, but his earlier film is a difficult and discomforting watch; the cinematic apparatus appropriating a fractured psyche to unsettling effect. The ambiguous narrative is a puzzle for the audience to solve; the kind of movie where it’s necessary to be alert to every line, visual clue and symbolic composition; a film that, heaven forefend, demands your complete attention. Little wonder that it’s had such a narrow and staggered release.

Definitively reading Enemy, in as much as any film can be definitively read, is a task made tough by Villeneuve, who collapses the space between the id and reality, the present and future, and our dreams and waking life. As it progresses you’re conscious of a circular story, with the back and foreground in free rotation. Jake Gyllenhaal’s bored and unfulfilled history teacher, professing his indifference to movies, spots his double in a film recommended by a work colleague and seeks him out. The in-movie Where There’s a Will there’s a Way later comes to symbolise his innate desire to break out and become an actor, confirmation of which comes from his mother who tips us off to the fact that Adam Bell, AB, and actor Anthony Claire, AC, stage name Daniel St. Claire, DC, are one in the same. Those initial cues matter, because, as Bell tells us early on, a culture of oppression is built on patterns, patterns that repeat themselves. Thus Villeneuve has crafted a movie that teaches you how to watch it as you go along. The film’s scheme, he says, will only be apparent at the end; a storytelling strategy underlined by the source novel’s opening quote, “Chaos is order yet undeciphered”.

Thus we’re initially puzzled at the recurring spider motif and what it may mean in what we’re fairly certain is a film about the emergence of and attempt to supress, one man’s dark half; the devil in him who wants to sleep around, attend underground sex shows and pursue a career based on vanity and hedonism. However, the climatic car crash and close up on a smashed driver’s side window, the window shattered in the pattern of a spider’s web, goes a long way toward settling the question without comprehensively answering it.

In a film where trusting your eyes is not an option, one can read what’s presented as the story of Gyllenhaal being taken over by his worst excesses. Yet the world of the film appears to be a curious place where the past, present and future run in parallel, defeating those attempting to impose a strict chronology on what they’ve seen. Perhaps that’s as it should be, as Enemy isn’t so much about cause and effect, rather the tragic inevitability that comes from being possessed by ruinous and all-consuming psychosexual flaws. Not a casual watch then, but rewarding for those who enjoy the menace and mystery that accompanies the cinema of the mind.

Certificate: 15 for arachnophobia, dull university lectures and a jaundiced palate.