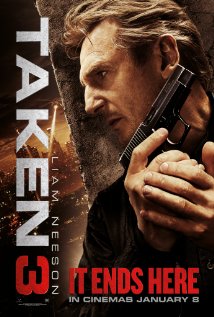 Bland on the Run

Taken 3 is, like the proverbial murder of John Lennon, a drag; the kind of movie that induces such antipathy, the sense you’re slipping from full consciousness to twilight, that it’s hard to recall a single defining thing about it. Did it happen? Or was it pieced together from the memory fragments of other movies? It’s reminiscent, in a break from the kidnap formula that once defined the series, as a poor man’s Fugitive, cut with generic action beats, washing powder, sugar, and other stuff designed to kill the buzz.

The film it’s most reminiscent of is Taken 2, another bloodless sequel with its edges sanded down, that like this instalment, failed to produce a single centilitre of adrenaline. The movie it has little or nothing in common with is Taken, which is a shame because some ticket buyers might have expected to find that enjoyable thriller’s DNA in its offspring. It seems both kids were adopted.

It’s not clear that Olivier Megaton or writer Luc Besson really understood why the 2008 movie worked. Perhaps they believed that audiences were bewitched by Liam Neeson’s family man. Sure, they like action, as a supplement to domestic drama, but what they’re really interested in is whether or not Neeson, daughter Kim and ex-wife Lenore, are ever going to snuggle up in front of the TV again. One can see the superficial logic. Was this not the emotional underpinning of Die Hard, one of the greatest action movies ever made? It surely was, but what Bruce Willis’ ordeal had, and to a far less extent, Neeson’s inaugural strife, was propulsive, brutal action; one man outnumbered and outgunned but nevertheless determined to fight his way to the finish, body count be damned. Both Taken sequels kept the family disruption but neutered the action. The consequence: boredom.

It doesn’t help that Megaton makes a dog’s breakfast of what few thrills remain, just as he did with the first sequel. There are fights, chases and more fights in Taken 3 but they’ve been murdered in editing. In a movie where no one’s taken on screen, at least not for long, the only thing missing is the footage required to make sense of what remains. You watch this F- editing project and consider that if the impact injury and blood were reinserted you’d have a violent, adult actioner – the very movie the greedy producers dare not make in case it reduces the ticket buying audience who’ve only turned up in the first place in the hope of seeing a violent, adult actioner.

Indeed, as Neeson notes, late into a muddled plot that characters deign to explain to other characters for the benefit of sleepy patrons, “none of this is making any sense”. He’s not wrong. Why would you cut a movie this way? Why excise all the kinetic energy and brutality? Why not employ screenwriters who can craft a polished English sentence (sample dialogue: “anything out of the usual?”)? Why? Merde, I suppose we’ll never know.

Certificate: 12A for a bloodless murder, dull father/daughter conversation, and a clueless Forest Whitaker.