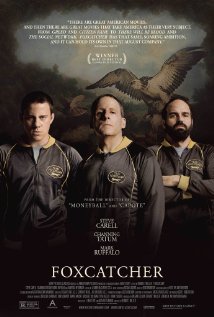 Foxcatcher’s factual credentials may be shaky but it’s an excellent and discombobulating psychological excavation – the kind of movie that creeps up on you, much the like the enigmatic John Du Pont, played with quiet menace by a transformed Steve Carrell. The movie compresses the timeline of events that saw Mark Schultz, winner of the 1984 Olympic gold medal for wrestling taken to Du Pont’s Xanadu and offered bottomless training resources in return for his help in offsetting the gazillionaire’s dynastic inferiority complex (his ancestors had real battles to fight, rather than the proxy peacetime affairs sport provides), while distending the spoilt bastard’s mental fragility, so he’s unhinged from the start. This makes director Bennett Miller a poor biographer but a good storyteller.

In a movie where very little actually happens, ramping up the dial on the pressure cooker’s a smart play. Those new to the story can sense its trajectory long before the characters, but with Du Pont first enticing then bullying Channing “Chatum” Tatum’s lunk, as their curious parody of a father/son relationship plays out with the sponsor showing a clear and divisive preference for Mark’s older brother David, it’s not clear who’s going to snap and why. Thus, unusually for most dramas, let alone those based on a true story, the movie’s murky narrative grips from beginning to end. The only thing that can be said for sure is that it’s not about wrestling and it certainly isn’t about one man’s patriotic desire to produce a series of domestic champions.

Miller’s movie chips away at its characters’ psyches, giving it 110%. We’re presented with a very modern tragedy. On one hand there’s Du Pont, made uncanny by Carrell’s pallid prosthetic forehead and worn false teeth, who speaks like a man grown in isolation and moves like he’s physically carrying a legacy unbecoming of so minor and insecure a figure. Vanessa Redgrave, as Du Pont’s domineering mother (Tatum notes her picture hangs in the toilet), underscores his emasculation; a man with no friends and no talent who carries a name synonymous with industry and American success. On the other hand there’s Schultz the younger – a witless bag of muscle and ambition, who despite his success at the Olympics, lives in the shadow of his older, smarter, wrestler brother. Mark Ruffalo’s David, perhaps in deference to the dead man he plays, is honourable, decent and largely untroubled, yet it’s him, not either half of the two hander that draws the movie’s focus, that ends up the victim. In this film, as in the real world it derivates from, the bystanders are notes in the margin.

Some will question whether Miller’s right to try and ascribe a motive of sorts to a crime that many thought largely incomprehensible, but your movie has to be about something beyond the incidental. Foxcatcher’s a contemplative and absorbing slice of life that topples two pillars of conventional wisdom, namely the idea that a drama has to be full of conspicuous incident to succeed and that so-called comic actors can’t play serious roles. See it and re-educate yourself.