Film Review: The Hobbit – The Battle of the Five Armies 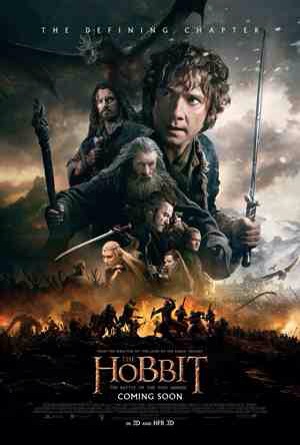 Once upon a time people complained that movies were inferior to their source novels because the process of adaptation inevitably lead to the excision of characters, sub plots and other excrescences deemed to be superfluous in the more immediate and propulsive world of cinema. In short, movies lacked a novel’s detail.

Now Peter Jackson’s inverted the practice and flipped said criticism with his Hobbit trilogy, taking a short story and piling on embellishments; his final version clocking in at no less than nine coccyx tormenting hours. The padding’s most conspicuous in the third and final part, The Battle of the Five Armies, because the story’s effectively already over before the film’s begun. Sure, there are moral broad strokes to be digitally painted in, but essentially the movie’s one distended third act; the tail end of a tale told.

You can almost hear Jackson sneering at the critics he sees as hypocrites; the kind that used to wish for novel-like scope in their blockbusters; but the problem is that he’s failed to prove original additions add to the source. His bolts on don’t deepen the mythology or add shading to the straw men and women of Middle Earth, they just fill the screen with action. The imagined audience, Peter thinks, can be bought off with virtual camera swoops, digital vistas and uncanny crisp images. Maybe they can, but they’re surely not the young adults who liked to have a bedtime story read to them as a child.

The greed of extending this story to three movies has been well documented so the point needn’t be strung out any further. Yet it’s funny that Battle of the Five Armies, a mercenary sequel, is a parable about avarice as a corrupting force. The decline of Thorin Oakenshield, determined to hold on to his re-acquired kingdom’s wealth, is the film’s thematic spine, but it’s hard to nod along to the message, that one should maintain one’s honour over material considerations and think of others, when you remember Jackson promising Tolkienites would only have to part with the price of two tickets, only to change his mind when the bean counters intervened.

In the absence of an original character focused story, all we’re left with is an expensive, digitally orchestrated brouhaha that bored socialists can claim as the first Hollywood blockbuster to challenge long held assumptions pertaining to hereditary wealth. The Battle of the Five Armies is a much more interesting movie if you concentrate on how Thorin’s altruism and nobility is eroded by bogus assumptions about his entitlement to inherited millions, which once acquired he refuses to share with the poor people who helped him obtain it.

“If people thought more about home and less about gold the world would be a merrier place,” he concludes in his death throes, and right he is. If only we’d view homes as homes not investments or chunks of capital, and each of us were obliged to earn our own crust, not trade on the bought advantage that comes from the toil and industry of dead relatives, then the world would indeed be more egalitarian and just.

Who knew, that tucked away in an otherwise dull and soulless exercise in technology employed in fan service, we’d stumble on that pertinent truth. That’s the wonderful thing about movies – even the bad ones, you just never know.

Certificate: 12A for Orlando Bloom, a romantic sub-plot that's superfluous and instantly forgettable, and Sylvester McCoy caked in bird excrement.