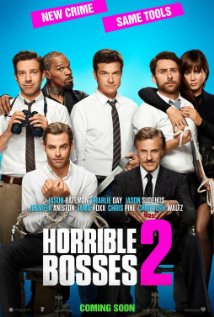 Who ordered the Horrible Bosses sequel? Was it you? Be honest. It hardly matters if you confess or not, actually. We’ll find you and when we do you’ll have a few things to answer for, by God. For a start, and to paraphrase Jason Bateman, why was it necessary to leave us with all the yammering? Hyperactive banter is an import from our real lives; the very lives we go to the movies to escape. In any group of friends, though mainly male friends let’s be honest, that kind of dry, ironic shtick peppered with crass allusions to sex acts and pop culture, is pretty much par for the course.

Look, we all the appreciate silliness and some finely crafted comic metaphors, and there are a couple in this movie. This is Kevin Spacey on the hapless trio being conned by business honcho and horrible bastard, Christoph Waltz: “he bent you over a barrel and showed you the 50 states”, and here’s Bateman agreeing to a night of sexual discovery with Jennifer Aniston but drawing the line at Hitler’s old favourite, coprophilia: “first time in the slopes, I’m going to stay off the Black Diamond”. These, my friends, are jokes and good ones and we enjoy them. There are others – a perfect plan for a drop and the delivery of fake kidnap victim Chris Pine, contrasted with a series of comic fuck ups, some nice sight gags, all the better for relying on visual comedy not the principle’s motormouths to work, but for the most part Horrible Bosses 2’s affected zaniness/stupidity makes it exhausting and ultimately, a mite tedious.

That’s a pity because the stars are likeable and, much the first movie, we want to enjoy ourselves – damn it, the will to laugh is there, but Anders, who specialises in ‘man bants’ (see the shouty, yammer fest that is Hot Tub Time Machine, penned by he) has not yet understood that wit, not noise, and characters, not types, is the rock solid foundation upon which all great comedies are built. So yes, if Horrible Bosses 2 was your idea, thanks for nothing. In fact, less than nothing because jokes about race and the word vagina net you minus points.

Certificate: 15 for the word "fuck" and "vagina" as joke substitutes, the horrific outtakes section at the end, and Kevin Spacey.