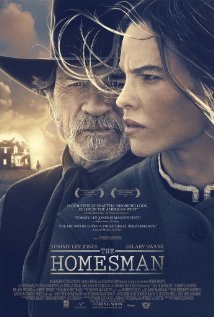 For around two thirds of its running time The Homesman has affected to be a great revisionist Western – a feminist take on the new frontier that jettisons uncultivated masculinity and simple heroics for the contemplation of a woman’s lot in the era of Missouri’s pioneers families. The storytelling may be old fashioned – long takes, dissolves and character forming dialogue, but the politics touch a contemporary nerve.

Hilary Swank’s Mary Bee Cuddy has made something of herself in her community but lacks that all important male validation; an elusive marriage proposal that will cement her social status and finances. Shrewdly cast, Swank’s unfussy appearance makes her credibly “plain”, in the parlance of the local gumps that reject her unedifying and somewhat desperate proposals, while the insane women she agrees to shepherd to a pastor’s sanctuary back east are the opposite: women broken by marriage and the demands of making a life on the frontier.

Saddled with emotional retarded husbands, and a sadistic rapist whose misogyny extends to violating his wife as she lies next to her elderly mother, these “mad women” are isolated and unsupported having been driven to infanticide, or having lost children to diphtheria. They’re barely cognisant shells. This, says writer and director Tommy Lee Jones, was the reality we later forgot about when playing Cowboys and Indians. In Swank, we have a tough female lead who’s nevertheless downtrodden; a complicated character we can invest in and learn from. Lee Jones, playing the feckless old timer she picks up en route, seems designed to invert the genre’s male archetype; a cranky sideshow that’s going to help us get to know Cuddy and help her achieve her goal, with perhaps a little redemption for both sprinkled on for good measure, but this, it turns out, was not the filmmaker’s scheme after all.

The Homesman is a frustrating movie. The final third courts derision. Following Swank’s shock suicide, one can see the remainder of the film as a thematically congruous postscript – a reminder to the audience, that no matter how much we’d like a character like Cuddy to succeed in this most hostile and perniciously patriarchal landscape, the odds against her are simply too great. She’s striven to be independent and has taken a chance on a new life, only to suffer loneliness and the indignity of having to beg underserving men for companionship and impregnation. Ultimately these social pressures and the broken mirror of the traveller’s desolate cargo prove too much.

The other way of seeing that final half hour is to imagine the narrative’s been hijacked by its male orchestrator-in-chief, Tommy Lee Jones. What starts as Swank’s story ends as his; even her tombstone, and with it, the memory of her contribution, is symbolically kicked away in the dying moments. Perhaps that’s how it was in the ol’ days – women remained unsung and unremembered; just wistful anecdotes for broken men to chew over, but it can’t help but feel like a cheat. An inevitable ending for a realist take on frontier life perhaps, but the wrong one. Consequently Tommy Lee Jones gets his cargo home but he can’t quite take the audience with him.