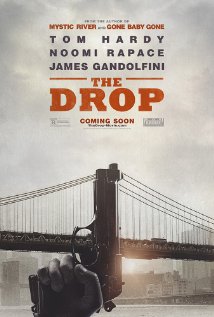 The Drop executes one of those third act rug pulls that retrospectively saves the film but makes the experience of watching it, frustrating. Until the moment of revelation, and the point where the subtle cues and accrued character asides finally coalesce into something bountiful, it’s been an engaging drama, underscored with menace, that’s never quite achieved lift off.

Tom Hardy’s barman is such a reluctant character – so detached from the tussle between his friend and business partner James Gandolfini and the Chechen mobsters that own their livelihood and use it as a drop for stolen cash, that we’re tempted to wonder why he’s the focus of the story. His burgeoning relationship with a put upon waitress, his acquisition of a local heavy’s abused dog – it doesn’t seem like enough to build a movie on, the dread inducing criminal backdrop notwithstanding, particularly in the absence of propulsive action and barbed dialogue.

Yet, that third act changes everything. From the ashes of an underpowered thriller rises a pin sharp character study, worthy of its literary origins, that’s both captivating and grounded. In fact, one feels almost ashamed, having not given the movie its due credit, as it justifies its low key approach and silent close ups, with something worthy of revisitation. This isn’t a wild, Dusk ’til Dawn or perhaps more appropriately, Usual Suspects pirouette either; the movie you’re left with was the film you had all the time, you were just too busy trying to work out where it was going to notice.

James Gandolfini’s final role, though not his best, nevertheless showcases the substance he brought to the screen. This isn’t his story, yet he brings a great deal of pathos to his supporting role as the former cock of the walk, sidelined and emasculated by his Russian paymasters. It’s typical of The Drop‘s grand design that what starts as background shading eventually ends up front and centre, driving a tale that lives on its wits and characters, rather than dense plotting and peacocking setpieces.

Still, the star of the show is Hardy, muted for much of the running time but centre stage when it counts. His schlock heavy turn in Star Trek: Nemesis aside, a role that nearly strangled his big screen career at birth, he’s proven himself as a leading man of great versatility and depth; a reputation that won’t be hurt one bit by his stealth turn in this rewarding thriller.