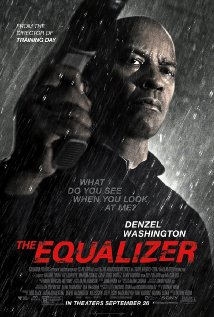 At first glance Antoine Fuqua’s thriller bears little resemblance to the Edward Woodward TV series of old. Denzel Washington, head shaved for aerodynamic effect, is not silhouetted against a Jaguar XJ6, there’s no adding money to a miniature scales of justice and no thumping, foreboding theme by Steward Copeland, but on second glance The Equalizer starts to resemble an origin story for the character we half-remember, TV series and movie sharing more DNA that you’d dared to hope.

Washington’s reprise plays like a second cousin of the old show. The victims, spearheaded by Chloë Grace Moretz’s tart with a heart, are vulnerable and under the cosh from some very powerful and ugly people, in this case the east coast branch of the Russian Mafia. They inhabit the same seedy and violent world that was the backbone of the TV incarnation. Washington’s Robert McCall, like Woodward’s, is a former agency man who’s lost those closest to him. The difference is that in Richard Wenk’s screenplay he’s not yet a gun for hire, just a guy who’s tried to put the past behind him and embrace an ordinary life, fruit smoothies an all, working in a home mart, surrounded by tools and chemicals that could be weaponised in the unlikely event the need should arise.

The notion of a reluctant equalizer, a man who could decimate a city but would rather enjoy a late night mug of a tea and an allegorical read pertinent to his character and situation, forced to turn on the killer instinct out of moral outrage, is a neat hook, and it’s well-handed by director and star alike. Fuqua manages the transition in gradations, facilitating opportunities for Washington to indulge in some low-level equalizing (helping his work colleague get a promotion, saving his mother from a couple of corrupt cops on a protection racket), before unleashing the combat trained, hardware savvy beast, who deposes his enemies with cold, clinical efficiency; a proxy for the film’s no nonsense style.

Of course the danger for the movie is that Washington’s operative is so good at murdering his enemies, constituting something of a one man army, that the film will be devoid of tension. Enter Marton Csokas as the Russians’ well-tailored and bloodthirsty enforcer. He’s absolutely terrifying and consequently the stage is set for a showdown the audience can invest in: the coy killing machine versus the tattooed psychopath.

So despite early indications this would be yet another cynical Hollywood bastardisation of a, for some, fondly remembered television show, The Equalizer ends up being a surprisingly fine-tuned machine of a movie, plotted to incrementally up the stakes and keep the audience interested. The can of worms plot works nicely, McCall’s initial attempt at extricating Moretz’s hooker from her woman-hating clients escalating to slaughterhouse levels, while Fuqua’s careful pacing and slick direction keep the movie on track.

Ultimately this is Washington’s show. The kind of reserved intensity on display here has been well cultivated by the actor in recent years, and whereas it’s a somewhat humourless routine, it works well in the context of a lonely character hiding his pain behind a tough façade. This Robert McCall is brooding and mysterious, and consequently at the close, his transformation into the Equalizer of old complete (though he now touts for business on the internet, rather than the local papers), we’re amenable to seeing him again, should another poor soul be in need of brutal backup.

Certificate: 15 for irresponsible tool use, Bill Pullman and turning up to dinner uninvited.