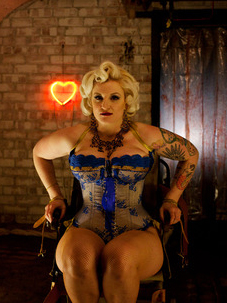 Three of a Kind

The horror anthology, indeed the anthology in general, is something of a dead sub-genre, at least on the big screen. That’s a pity because there’s a great deal of pleasure to be gained from exploring a world from multiple perspectives, enjoying the payoff from overlapping narratives. Tarantino’s Pulp Fiction reminded the world there’s fun to be had with the cine-short story, and now writer Alan Moore and director Mitch Jenkins have collaborated on Show Pieces, a grand-guignol triptych that proves, were proof needed, that you can pour caustic wit, dread and melancholia into the hole vacated by a large budget and come up smelling of blood.

At this year’s FrightFest Show Pieces was one of the few penny pinched offerings to set the screen alight. Too much festival filler is amateur-like and half-baked, suggesting a mentality that tethers limited resources to scant ambition. Moore’s morose trilogy utilises less than a handful of locations – a bedroom, a working man’s club and Northampton Cathedral, but the films are rich indeed, hauntingly lit, vividly colourful and conceptually condensed. It’s a set of linked stories that rob the unambitious of excuses. Good writing and direction cut through, it seems, regardless of resources.

The three episodes, Act of Faith, Jimmy’s End and His Heavy Heart explore themes of loneliness and self-loathing, immorality and atonement. We’re introduced to a set of tragic figures, a downtrodden escort, a broken philanderer, and their haunted environs. Much of Show Pieces is atmosphere, built from uncomfortable silence, distended sound and incongruous feeling. It’s clothed as a nightmare and it plays out accordingly, undercutting expectations, free associating, scratching behind the eyes. A universe is built and a mythology created. It’s an unsettling world we might wish to visit again, and will, should Moore and Jenkins succeed in funding their feature length sequel, The Show.

Moore deserves credit for suffusing his trilogy with native humour. FrightFest’s bill often suffers from a preponderance of indigenous, that is, British horror, that’s derivative of American genre staples in style and conception. Show Pieces’ “Nighthampton” is marked by midlands grit and drollery; it’s culturally distinctive, phenomenologically British, and consequently an example of the kind of films we can and should be funding; movies that reflect regional sensibilities, diversifying the genre.

Anyone interested in Moore’s work, and the opportunity to enjoy committed performances from Siobhan Hewlett, Darrell D’Silva and Andrew Buckley (with the voluptuous Khandie Khisses bringing up the rear) should seek this out. Everyone else should follow them.