Film Review: Dawn of the Planet of the Apes 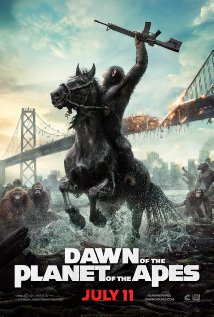 Malcolm in the Middle

For the children of the 1970s and ‘80s, the question that bedevils them, job security and home ownership aside, is where’s the next generation Spielberg? Who will engender the anticipation, the same sense of confidence, guaranteed by the wunderkind of old? The answer may be someone like Matt Reeves. His Dawn of the Planet of the Apes may lack the virtuoso composition and movement that Spielberg brought to his early entertainments, but it’s adroit in all other departments; a well-controlled high concept blockbuster bulked out with humanity – that’s man and anthropomorphised ape.

It’s a much more accomplished film that Rupert Wyatt’s Rise of… and that’s due in part to Reeves having a more compelling tale to tell, in part because the weak human characters from the first film have died off. In their place there are two camps – human and ape. The former, spearheaded by Jason Clarke and Gary Oldman, resides within a San Franciscan in-town shanty, the latter, held together by Andy Serkis’ performance capture chieftain, Caesar, in the forest near Marin County – a location that gives the simian encampment more than a lick of Return of the Jedi nostalgia. Clarke’s humans, genetic survivors of the Franco-plague of yore, need power from the dam in ape country, but because of mistrust exacerbated by hawks in both camps, a pressure cooker, ticking bomb dynamic that sustains the movie’s palpable tension, the uneasy truce between the desperate Homo sapiens and threatened Hominidae is, we suppose, doomed (and besides every member of the Charlton Heston fanclub knows how this turns out).

It is in short, a story plotted with laser-like precision, that hangs off the age old question of whether one should give in to mistrust and violence or endeavour to go down the tolerance and understanding route once beloved of humans in that part of the world before James Franco killed them all. The story grips because the characters, though thin, are strongly etched. Perhaps Malcom and Caesar are more symbols than beings, but there’s a tenderness and seriousness in Clarke and Serkis’ performances than keeps the film focused, the threats to peace being equally vivid.

In a down and dirty post-apocalyptic movie, suffused with grit, there are economic flashes of humanity, real and rendered, that showcase Reeves’ debt to Spielbergian narratives. A clutch of scenes recall the effectiveness of the father-son mirroring moment in Jaws, a template for punctuating a thriller with warmth and a character’s vulnerability. Such moments anchor a film; keep it honest, resulting in well-tailored entertainment.

If Dawn’s lacking in any area, it’s fun. We live in an era where blockbusters must be po-faced or infantile; the hinterland between the two fenced off sometime in the early Noughties. You’ll argue there’s not much room for humour and impishness in a movie about humanity’s last stand, but one day, when we’re extinct and our art is all that remains of us, the next dominant species will find evidence in the archive of similar scenarios handled with a fine sense of the absurd. Reeves’ movie is rock solid but he’s forgotten that even a story about a shark munching on a ten year old had three inebriated men messing about in a boat.

Still, if we must have pathos and tragedy alone (perhaps simian flu wiped out humour) then let it be finely crafted like Dawn of the Planet of the Apes. As well as being a story well told it’s also a technical tour de force; a movie with a troop of believable, animated apes with eyes that look as if they may have souls rather than code behind them. It’s this marriage of computer generated craft and succinct, thoughtful storytelling that elevates Dawn to summer fare’s top tier. Now if we could just have an instalment in which everyone and everything had a little less utility and a little more light and shade…

Certificate: 12A for camcorders with a ten year battery life, James Franco archive footage and lines written for trailers.