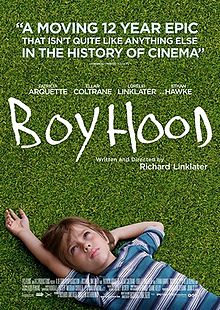 Richard Linklater isn’t the first to document a character’s life at various stages using the same actor, nor is he the first to incorporate the scope of a character’s formative years into a narrative, but he can claim to be the first director to film a fictional character’s childhood over a comparable timeframe using the same cast (on film anyway). Ellar Coltrane’s Mason is seven when Boyhood begins and eighteen when it ends. The film captures the experience of growing up in the years between 2002 and 2014, cultural detritus included. Boyhood is what you’re promised and boyhood’s what you get; a film that mimetically reproduces the vignette-like quality of formative memory; an experience here, an observation there, a slight but impressing conversation; the good and bad, filmed, sometimes fleetingly, from the zone of childhood perspective. The result may be a new realism; production and timescale walking hand in hand.

Natural aging in Boyhood is a new kind of visual effect. The snapshot approach was strength tested in Linklater’s Before trilogy and it’s pushed front and centre here. This is to in-camera experimentation what Terminator 2’s shapeshifter was to The Abyss’s computer generated water snake. There’s undeniable power to an experience (story would be too strong and shapely a word) captured so vividly, using an import from reality. With no need to suspend your disbelief, no need to overlook casting changes or applied age makeup, the real time snapshot lends weight to the developing character’s experiences, their aspirations and interests, disappointments and mistakes.

Better yet Linklater uncovers a truth hidden from view by conventional production methodology, namely that when children are given the space to naturally reflect their experiences on screen, to play children rather than ciphers for the child-role in a family, or be ultilised as a plot device; a thing to be saved or to motivate an adult character; they become three dimensional. Like children, you might say.

Linklater’s made much of the shared experience theory, that many childhoods are composed of similar moments, and he checks many of them here – growing up a single parent household, forced relocation from your first home, a goodbye from an old friend, weekends with an absent father, perving on lingerie models, arguments with siblings, and so on. There’s so much personal experience in Boyhood, much of it transferable, that it must be marked as extraordinary successful in its ability to tap into the experience of growing up. I was personally surprised to discover how many of my own memories looked to have been adapted and I won’t be alone; that pairing of the universal and the intimate is what gives the film its sense of empathy and understanding. For once a film’s been made that not only remembers the content of childhood but how it felt. Boyhood’s psychologically astute on everything from a boy’s suspicion of his single mother’s boyfriend to the self-interest and character flaws in adults. It knows a lot and it says a lot.

But with a new realism comes new difficulties; an inability to impose a scheme on the film, to give it a shape, to develop child characters as you may wish. In effect, Linklater’s given up the filmmaker’s ability to play God. Does it matter? As this near three hour movie progresses, yes. We wouldn’t expect a film about childhood to be bolted together like a three act movie; life’s bitty, sometimes inconsequential, often static, and remembering this allows Boyhood plenty of latitude. But in casting Coltrane and his daughter Lorelei at seven and eight, respectively, Linklater’s taken what’s known as the Harry Potter Gamble or Radcliffe Roulette: that dangerous game where you cast a still developing actor and hope their talent matures with their part. If it does you’re a genius, if it doesn’t those later years look awfully stilted.

When we meet Mason and sister Samantha, he’s wide eyed and restless, she’s precocious and funny. Lorelei Linklater’s great in this early period, Coltrane subdued. The hope must have been that the boy would find expressivity and wit in his teens while his screen sibling became yet sharper and more dynamic. Unfortunately Samantha becomes a near silent character, all that early vitality drained before our very eyes, while Mason, the film’s centrepiece, grows up to become a moping, sedate, inanimate deep thinker; the kind of kid you suspect writes great poetry but won’t read it to anyone.

Linklater’s project requires that he adapt his film to his growing cast’s personalities, that he incorporate their ideas into the development of their characters, else the film’s truth is compromised, but the consequence is that Boyhood sheds interest as it progresses. The story of a boy is only as interesting as the boy himself; shared experience can only take you so far. One wishes Linklater had been given the time and the money to develop the story of four families instead of one, the most promising protagonists taken forward to maturity. As things stand we have one of the most interesting movies ever made, but also, perhaps, one of the most anticlimactic.