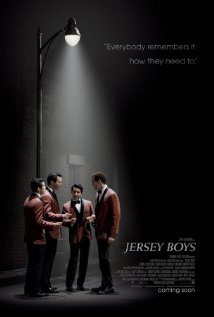 Late career Clint Eastwood, and here I refer to his directorial career, means inconsistency, much like mid-career Clint Eastwood. Sometimes you have to pinch yourself and be reminded that the director of Unforgiven also gave you True Crime (that un-parodied the “traffic was a bitch” climax of The Player’s film within a film seven years earlier), much as Clint fans of the ‘80s needed to be convinced that Firefox and The Eiger Sanction were ejaculated from the same father. Well, maybe the latter two aren’t so hard to believe.

Now 84, the former Dirty Harry is still without a signature style or discerning eye for screenplays. Jersey Boys certainly has the feel of late Clint – it’s placid stuff, carefully paced, and mannered. The old man likes his storytelling spruce and functional, but feelings about this tend to mirror those directed at his on screen counterpart. We preferred him when he had a little vitality…and peepers good enough to spot bad makeup.

What’s odd about Jersey Boys is that it’s neither fish nor fowl. Adapted from a Broadway show, it’s theatrical in part – characters breaking the forth wall as they would if addressing a theatre audience, moments of heightened acting, curious earnestness – but Clint also wants to make a no nonsense biopic of Frankie Valli and The Four Seasons, so we get moments of incongruous (or perhaps congruous) movie drama; a kind of low calorie Goodfellas. Who wants to see Scorsese with all the good stuff taken out? Theatre people, that’s who. So why, you ask, don’t they take their seats and leave us out of it?

No one’s going to fault John Lloyd Young as Valli, or any of the other toppings on that famous pizza, but it’s clear that musicals seldom work as satisfying slabs of drama and this sanitised biopic, directed by a man romanticising his own youth, is no exception. When Renée Marino debuts as Mary, Valli’s love interest, all sass and spunk, we’re hopeful that many an electric scene will follow, but she promptly fades from view, only to reappear in a couple of fleeting scenes as the lead singer’s downtrodden, drunk and embittered spouse. Eastwood will grumble that this isn’t the story of Valli’s home life, but it keeps coming back to Scorsese: Casino was first and foremost a tale of mobster gambling but Sharon Stone was permitted to be more than decorative. Perhaps the reason Valli’s domestic strife is sketched so lightly is that the man himself is one of Jersey Boys’ producers, which is a bit like a space shuttle engineer vouchsafing their own safety checks.

Like many of Clint’s movies, Jersey Boys is watchable but instantly forgettable. As with recent efforts like Hereafter and J. Edgar, scenes run on enough to allow time for contemplating the little things. Why didn’t Eastwood wake up Christopher Walken? Why are Young’s sideburns stuck on? Why do Valli’s kids look so much older than you’d expect at this point in the story? Why the hell did Clint hold shots of his cast frozen like idiots, following the tacked-on and wholly unnecessary theatrical finale? With luck someone will ask him before it’s bye bye baby.