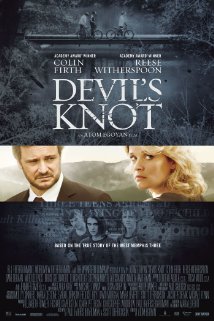 The victims of murder; including those killed and wrongly accused; are arguably further diminished by a poorly executed film made in their name. Pity Memphis boys Steve Branch, Michael Moore and Christopher Byers: molested, carved up, hogtied and drowned in an Arkansas creek, back in 1993. Atom Egoyan’s dramatisation of the investigation that followed, fuelled by righteous anger, makes a mess of a complicated case, walking the audience through its myriad of suspects, suggestions, motives and institutional fuck ups with extraordinary clumsiness. If Oliver Stone’s JFK set the standard for compressing a high volume of information and innuendo into a freight train narrative, then Devil’s Knot falls far short. In fact, its primary reason to exist, to shake its head at the scapegoating of three teenagers, comprised of two dejected goths and a boy with a subnormal IQ, is frustrated by the baffling decision of screenwriter Paul Harris Boardman not to progress any further than the end of the original trials.

To put this decision in context, if one recalls the aforementioned JFK, a film interested in exploring what the filmmakers imagined to be an historic wrong, it would hardly have made the same impression had Kevin Costner assembled his team of prosecutors and told them, following the assassination of Lee Harvey Oswald, “well I don’t like it boys, but I think we’ll have to leave it there”, subsequent developments presented in a series of pre-credits captions. Yet this is Devil Knot’s strategy. At the very moment you’re expecting a final act, with subdued P.I Colin Firth finally ready to kick into gear and unpick the botched police investigation and judicial car crash that’s seen evidence wilfully misinterpreted and lost, witnesses manipulated or ignored, and a whole heap of circumstantial nothing waved through as hard evidence, the film ends.

Perhaps Egoyan thought the case would be enough, but so bitty and frustrating are proceedings, so insubstantial the developments, that we watch his movie expecting the payoff to be illumination and coherence at the business end. When it’s not forthcoming we’re left like teen convicts Jessie Misskelley, Jason Baldwin and Damien Echols: sure and certain that justice hasn’t been done but not much closer to finding out what really happened.

If the cause of the film’s failure is initially inexplicable, that’s not to say we don’t have our suspicions. One imagines its timidity; the reluctance to point the finger, nods and winks notwithstanding; is attributable to the threat of litigation. The filmmakers have drawn many conclusions. They suspect the boy’s step-fathers and a local ice cream peddler (casting the likes of Dane DeHann and Alessandro Nivola whose faces say what the script can’t), they imagine the men intimidated some witnesses, they strongly suspect that once the teen suspects were named, crude Southern religious prejudice and attention seeking miscreants, egged on by a lazy and incompetent police force, did the rest; but if you’re expecting firm declarations on these matters, don’t. Egoyan and co. don’t dare speculate too strongly, fearing that anything stronger than gossip would excite the lawyers of the depicted. Therein lies the problem with Devil’s Knot; it’s attempting to tell a story that’s unfinished. It’s half a tale and half a movie.

That isn’t to say that the half we do get couldn’t have been tighter. There’s a meandering quality to the way the case is presented and Colin Firth, as the film’s crusader, is fatally miscast: too understated by half and never in any danger of rallying the audience to his cause. Egoyan has enough respect for the record not to alter Firth’s role and merge him with the defendant’s lawyer, but by refusing to do so he demotes Firth to the status of a man who spends much of the narrative watching others fight the case, commenting in the margin. This is a courtroom drama in which the man fighting the good fight has to wait outside.

Devil’s Knot isn’t a total disaster. A case this gruesome with so many inconsistencies can’t help but be interesting and Egoyan effectively captures the absurdity and idiocy surrounding the trial, from the jurors with their oversized “Juror” badges, to the prosecutor that tells the defendant’s peers that circumstantial evidence amounts to proof, but the filmmakers are guilty of lacking focus and clarity and consequently have botched the chance to effectively bring this miscarriage of justice to a wider audience.