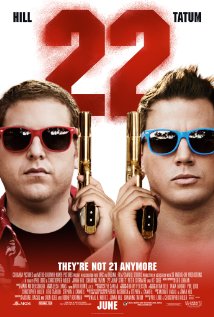 How They Got Into College

22 Jump Street’s a highly derivative sequel but in keeping with its mirthful and often droll manifesto, it undercuts its sameness with plenty of self-reflexive winking at the audience; the joke that this is a beat for beat retread repeated often, like a political slogan, because when the crowd’s in on the gag they don’t feel taken for granted.

Would a different story have been preferable? Well, this is a movie based on a repetitive TV series (there’s even a recap of the previous “episode” at the start, in case you’d forgotten as much), so perhaps the room for manoeuvre was slight, but wrapping the formula in fairy lights and pointing to it throughout does have one advantage; it allows returning writer Michael Bacall the chance to wrongfoot us with a third act plot twist. Yes, surprise still matters kids, even when it’s all tongue in cheek ribbing, and isn’t it nice to watch a comedy that’s remembered it?

This is a follow up for Jonah Hill and Channing “Chatum” Tatum’s  bromantic cop buddies that’s full of nice one liners, “I’m the first person in my family to pretend to go to college”, and great comic setups. Only occasionally does the glibness threaten to become exhausting. Like its predecessor it’s not really interested in character or telling a story, rather than tethering a robust clothesline between two posts and hanging as much rowdy banter thereon as inhumanely possible. That’ll do it for most patrons, and it remains a likable double act, the self-important, needy Hill being a nice contrast with Tatum’s put-upon lug, but just occasionally you wish that returning directors Phil Lord and Christopher Miller (it’s a buddy movie in every respect) had taken a step back and anchored the movie somehow. Instead, everyone’s on in the rebooted Jump Street universe, and whereas this comic variant is infinitely preferable to its solemn, real world counterpart, going full retard, to quote Robert Downey Jr., doesn’t given the audience much room to breathe. Consequently this joke-a-thon feels about twenty minutes too long, but it remains highly enjoyable for all that.

Amongst the puns, sex and age jokes (I particularly enjoyed the description of Schmidt and Jenko, dressed for Spring Break, as the stars of a sitcom called “Hawaiian Dads”), the one that’s taken on an extra layer is Tatum’s sensitivity to gay slurs, following his enrolment in a class on human sexuality. The filmmakers couldn’t know that Hill would go on to call a persistent photographer a “faggot”, and that subsequently the gag would remind anyone who saw it of his indiscretion on opening weekend, but it’s a reminder that life, as well as audience reaction, can sometimes shape a film after it’s been completed. I’m going to file the joke under U for unfortunate, to join the scene in Performance where James Fox, talking to Mick Jagger, remarks, “you’re gonna look funny when you’re older”.