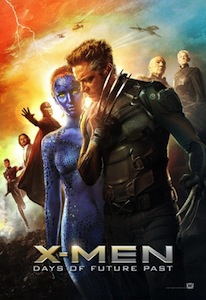 After Matthew Vaughn’s X-Men: First Class showed there was both life and vitality after Bryan Singer, was there really an X-fan who wanted the original director back at the helm? Singer’s interest in wrenching the new trilogy from the talented hands of Vaughn was clear enough. Brett Ratner’s workmanlike conclusion to the alleged sexual deviant’s first two movies rankled the director. He gambled his place in the mutant firmament on Superman Returns: a botched job. Subsequently his stock took a hit, while in the corresponding period Vaughn ascended, culminating in an X-Men movie that had far greater depth and artistry than Singer’s originals. Thus Singer, who’d first seen his work tarnished, then improved upon, had a vested interest in re-seizing the mantle, not to mention directing a much needed hit.

Days of Future Past is a time travel story; an opportunity, whatever the guff spouted by Singer about multiverses, to wipe the ending of one trilogy and hijack another. For fans of Vaughn’s First Class this is bad news. The second film in his trilogy is now a counterfactual, a thriller we can only enjoy if we too learn now to travel back in time and split reality. The story is also problematic for continuity aficionados. For Singer’s movie to work completely there’s some explaining to do. Despite a cameo from Rebecca Romijn as an older Mystique in the prequel, the exact relationship between Vaughn’s film and Singer’s 2000 movie was ambiguous. Xaiver’s crippling at the climax of Vaughn’s film directly contradicted the prologue of The Last Stand, set in 1986, featuring a mobile Patrick Stewart. Ratner’s movie also featured the death of the character, so his reappearance also required some clarification, as the plot to this sequel features the paraplegic in the dystopian scenes that bookend the picture. Those that saw the post-credit scene in The Wolverine, in which Stewart returned, giving Logan the non-explanation “you’re not the only one with gifts”, subsequently fearing this movie would fudge the resurrection problem by quietly ignoring it and cutting to the quick, were right to worry. Singer’s reprise is too busy to make sense.

The result is a movie that begins in the post-apocalyptic future of 2023 with Xaiver inexplicably alive and Logan fortified with adamantium, despite losing that unique feature in last year’s The Wolverine. We aren’t treated to an explanation for either, nor given any help in understanding why, when Prof X and Magneto were aware of the Sentinel threat years earlier (The Wolverine being set in the present day), they subsequently took no action. We’re left to assume the apocalypse came shortly after their reunion at the airport, but not so late that they couldn’t assemble uniforms and equipment before travelling half way across the world in war time. A long piece of exposition later we’re thrown back to the 1970s, Singer crossing his fingers that the ontological paradox that bedevils this attempt at reconciling two sets of films will be forgotten by an audience happy to indulge in period fashions, the distraction of Hugh Jackman’s bare backside and the figure hugging blue latex attached to Jennifer Lawrence.

To say that the lack of ground work in filling these plot holes is an irritant is underselling it, but this mild contempt for the audience aside, Days of Future Past picks up once it’s jettisoned the baggage from Singer’s original movies, becoming an entertaining period piece with an engaging, high stakes story. Jackman, still channelling late ‘70’s Clint Eastwood, is a fine addition to the superior prequel cast, fortunately prominent throughout, while the diminutive Peter Dinklage as Trask, the quote unquote villain of the piece, makes for an interesting antagonist. His misplaced idealism, the hope that mutants will unite humanity behind a common enemy, is a wonderful piece of doublethink from a character born with dwarfism whose company develops prostheses for the disabled. This, you’d think, would make him less suspicious of difference, but making Trask a hypocrite, radicalised by US losses in Vietnam, is a smart move in narratological terms. It shows that Days of Future Past, like its immediate predecessor, is content for events to shape characters, avoiding simple contrasts while sensitive to period anxieties. The politics of difference is nuanced after all, so two and a half cheers for a movie that recognises as much.

With the meat of the movie nicely cooked, it may be churlish to lament the portions that don’t feature James McEvoy and Michael Fassbender, namely the original cast appetisers, but there’s no getting around it: in story terms they’re underdone. The Back to the Future ending cuts away from a discussion on the intervening years that might have retrospectively made this a more coherent adventure, while talk of choices and alternate realities only obfuscates matters further. Perhaps none of it matters, after all Singer orchestrates some fine setpieces and spins an entertaining yarn, but some, chiefly those convinced to buy an X-Men boxset on the eve of this release only to see the new movie undo at least three of its predecessors, are entitled to ask the question that won’t go away: what happened?

Certificate: 12A for one hard "fuck", continuity headaches and the absence of Kevin Bacon.