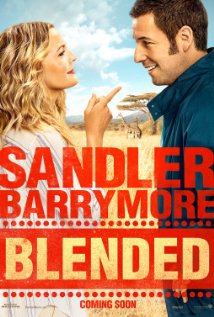 Blended has everything you’d expect from an Adam Sandler comedy: a misleading epithet, “comedy”, broad jokes born of prurience and child-like preoccupations like mess, injury and cruelty, tempered with mawkish and incongruous sentimentality. On top of that there’s shouting, screaming, dysfunctional families (two sets here) and in-movie excuses for product placement that belie the cynicism that informed their inclusion – in this case, in a sign that Sandler’s learnt from the people who once studied him, borrowing a trick from Ben Stiller’s Secret Life of Walter Mitty, linking a character’s sob story with an oft featured brand. Poor Adam met his dead wife at Hooters. That’s why, twenty years on, forced to go on a blind date with Drew Barrymore, he takes her there. It’s also why the chain gets mentioned throughout. Lucky for this family comedy centred on joining two single parents that his dead partner didn’t work in an abortion clinic.

Yet patrons hesitating in seeing Blended because it sounds like more of the same should think twice. Sandler’s latest does bring something new to the table. It’s one of the worst edited, worst directed movies you’ve ever seen: essential viewing for film students the world over, anxious to learn how mannered, theatrical performances, in which actors gurn and chews their vowels as though they were meds, can kill a scene stone dead. If its still twitching get Tom Costain to cut the picture so it resembles an assembly edit someone abandoned. No need to trim scenes or paste footage together in a dynamic way when one awkward take can follow another, the flat rhythm of each exchange dictating the cuts rather than an imperative to distance the footage from someone’s student video project. By this method a 90 minute film can be stretched to a punishing 117 minutes. Did Costain die before he could finish the job? Do his family know where he is tonight?

The additional time allows for closer study of a story plotted on the assumption that Sandler’s fans loathe surprise and complications. Adam’s screenwriters keep it simple, knowing he won’t want his paid holiday to South Africa marred by too many acting commitments. Consequently we have the bare bones of a movie, featuring two families that are the same with variations. Barrymore’s a mother of two boys who’ve been abandoned by their father (Joe McHale playing a mono-dimensional shit), while Sandler has lost his wife to cancer (because as a man he has to work harder for our sympathy), left with three girls. All the kids are troubled, their problems arising, in a break from reality, because they don’t have a parent of the same sex in the house. Sandler struggles with his daughters’ sexuality and emotional problems, while Barrymore struggles with her sons’, er, sexuality and emotional problems. The two initially hate each other of course but with the same families, same credit cards (VISA if you’re interested) and same cars, it’s clear they should be together. Unfortunately they don’t realise this for two long hours.

While we wait patiently for the couple to get together, creating one super-family that will serve everyone’s needs, they improbably wise up to each’s potential on a joint holiday to Africa, inherited from the failed pairing of Barrymore’s business partner and Sandler’s boss. While staying in a generic resort that, bar a couple of scenes featuring rhinos and elephants, could be anywhere in the world, Sandler coaches Barrymore’s kids in sports while she provides his daughters with motherly love and beauty tips. That’s right, this is as stereotypical as gender roles get, but Sandler’s audience don’t come to question social paradigms, rather see the world through the eyes of a sexually retarded teenager who imagines that dewy eyed sentiment will balance things out for the poor girlfriends who’ve been dragged along on cheap dates.

A movie that looks to have been written in half the time it takes to watch, Blended is predictably interminable stuff from a comedian who long ago abandoned serious comedy for quick pay days courtesy of undiscerning audiences. Drew Barrymore’s presence, despite a career worst performance, allows for a modicum of sweetness and likability in what would otherwise be a washout, but what hold Adam Sandler has over her, compelling her to participate in this Wedding Singer cancelling enterprise, is something that should be looked into. Now.