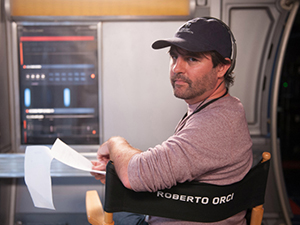 Ooh Trayers, these are strange days indeed. Blockbuster scribe Roberto Orci, who’s been dazzling audiences for years with screenplays marked by depth and bottomless characterisation – the likes of Transformers, Transformers 2, Cowboys and Aliens, and The Amazing Spider-man 2 – has been appointed as J.J Abrams’ replacement for the forthcoming Star Trek movie. Orci, to the best of The Ooh Tray‘s knowledge, hasn’t so much as directed a tourist to the bus station, so as fans of Gene Roddenberry’s franchise, we sat down and composed some pointers for the debutant.

What you read below is now in his inbox. Sure, Bob may have nothing but contempt for fans of the franchise, which as he counts himself amongst them must constitute a form of self-hatred, but Trek belongs to all of us, meaning we help out those responsible for its production…whether they like it or not.

The full text is as follows. If we get a reply, we shall of course update accordingly.

On behalf of myself and the entire critical fraternity, may I congratulate you on your appointment as director of the forthcoming Star Trek movie? Well, may I? Do let me know, because otherwise you won’t have said congratulations.

I hope you realise how lucky you are. Talent alone (supplemented by luck, connections and intense lobbying) have got you the gig. You’re the envy of Trekkies worldwide. But now I must ask you to execute a psychical crash zoom on my imaginary face: you love Star Trek but does that qualify you to write and direct an adventure celebrating fifty years of the franchise?

Trekdom’s a family, Bob. We’re like a church, sans the superstition. Gene Roddenberry’s universe is godless and empiricist, don’t forget. Being part of that family means we help each other out in difficult times. You’re about to embark on the greatest challenge confronting any creative person; you’re charged with making a stellar Star Trek movie. Only two people have succeeded in this aim, Nicholas Meyer and Leonard Nimoy. Your friend J.J Abrams might have been the third but he had less material to work with, script wise.

Many of my colleagues are content to leave you to your own devices, “what will be will be”, they say, but Trek’s too important to leave to any one man, so with that in mind I offer some advice, on behalf of the fans, on how your can prepare for this assignment. Why should you take any notice? Because we’re all on the same team, Bob, remember? That, and should you get it wrong you’ll be vilified and detested by your fellow Trekkies for the rest of your life, forever synonymous with failure – a byword for imbecilic fan fiction personified.

The following ten points are broken into two sections, script and screen. The former’s based on a detailed analysis of your produced works to date. Don’t take any of it to heart, your reputation’s on the line here. You can’t afford to be blinded by pride.

The story for the next movie is your business, but whatever you do, whichever direction you go in (hopefully the direction marked “cerebral odyssey, powered by optimism), you must apply these checks: we’ll call them first principles.

1. Add depth to the characters. This means doing the psychological groundwork. It’s not enough for a character to be kicking against something or someone, try to allude to some kind of inner-life or interiority – give your characters dialogue that hints at a gap between what they say and what they believe. Ambiguity’s a great tease for the audience, it gets them thinking. If you want people to enjoy your movie they’ll need to think once in a while. Characters that are no more than the sum of their motivations, i.e. Nero, or extended metaphors, i.e. Electro in The Amazing Spider-Man 2, won’t do. If you can’t write these parts, hire someone who can. Go on, do it now – the other points will be waiting for you when you get back.

2. Plot your story so that it’s coherent, has unimpeachable internal logic and makes sense, not just in terms of incident following incident, but the character’s motivations. In other words, no Romulans trying to destroy the federation because one of its representatives had the audacity to try and save his planet, no supermen hidden in torpedo tubes. Don’t write the script backwards; the future isn’t written backwards and neither should your screenplay be. That means that your characters must never act in a way that suggests they’ve read the script, so know the things they’ve improbably planned for will transpire as they imagine. If it’s unlikely they’d rely on coincidence and providence to allow their plan to succeed, if there are too many variables for characters who lack foreknowledge of what’s to come, rewrite. At every stage of the writing process ask of each and every character, each and every scene, does what’s happening here make sense? Ask the questions that audiences will ask later and if you can’t answer them without a fudge or line of dialogue inserted to paper over the crack, rewrite. If you can’t make something work pass it to someone who can. Kill your darlings (that’s a cliché by the way, avoid those). Remember, the integrity of the script is more important than the scenes you like but can’t organically integrate into the story.

3. Remember what Star Trek’s all about: to get you started, consider what it isn’t about – it’s not about fucking, swearing, mindless action, macho posturing, simple good versus evil plotting or 9/11. Star Trek is an optimistic, humanist vision of the future – it’s about ideas, wonder, philosophy, innovation and, pay attention, characters working together to solve problems in an enlightened environment. Starfleet isn’t a “peacekeeping armada”, a phrase that’s oxymoronic as it implies we’ve built warships to keep the peace (this is the 23rd century not a thinly veiled critique of American military in the 21st), it’s a fleet of exploratory vessels, armed only as a reasonable defence against other celestial navies. Only our aggressive enemies refer to starships as “battle cruisers”. You’ve upped the military rhetoric in the last two films; try toning it down in the next. Nicholas Meyer introduced a lot of naval motifs but he didn’t lose sight of what the Federation represented – scientific progress. Genesis wasn’t a weapon remember, it was a terraforming tool.

4. Don’t change the character of the Enterprise crew: Spock melding with Uhura, Spock beating a man half to death, Chekov some impish prodigal genius, Scotty a casual killer – these are not the characters Gene Roddenberry created, and certainly not the ones that are paying for your new house now. I don’t care what the studio asked for, or what their broad focus groups say, a Star Trek movie should feature the characters we know and love, as established, and don’t give me any bullshit about alternative timelines – how would a change to Kirk’s backstory influence Chekov’s cognitive development or Spock’s libido? In a mirror universe, where everything’s different – the underlying culture, the values, hundreds of years of history, yes they’d be different people, but not in this variant. Yes, Kirk and Spock are close, but their relationship is characterised by gentility and understatement, not by fighting, yelling and barely supressed anger. There’s a reason these characters appeal to the socially awkward; they don’t act like the kind of arseholes everyone gravitates toward. If you’ve already written a scene in which Kirk and Spock tussle over Uhura’s affections, take it out. Now.

5. Remember that villains and violence aren’t always the way. Yes, I know the logic must seem absurd but consider, outside your limited contribution to the franchise, some of Trek’s best moments haven’t featured a villain of the week or idiotic action sequences. When John Logan wrote Star Trek: Nemesis, he said one of his ambitions was to see the Enterprise flip over in mid-flight. That was his ambition? What about a feel good story powered by fucking ideas? Star Trek IV made over $200m domestic, adjusted for inflation, and it was about saving the Whales. No violence, no villain, just intelligence, a compelling story, humour and great character moments. So the point is it doesn’t have to be a story about a planet killer, a megalomaniac or a threat from an enemy superpower – you have an entire universe to play with, why not surprise us with something new and thought provoking, backed up by the characters we love and emotional and psychological arcs that feel authentic for said characters? Do that and you’ll be hailed as the man who returned Trek to its cerebral roots. Turn in another mindless blockbuster, with no ambitions other than to appeal to idiotic teens, and you’ll rightly be derided as an opportunistic arsehole who puts his own ambitions ahead of the franchise.

1. Go to http://www.redlettermedia.com and studiously watch the Plinkett reviews of the Next Gen movies and Star Wars prequels. Make copious notes. Watch them again. Then watch Citizen Kane; proof a debut can be delicious. Note the use of angles, depth of field, blocking, and use of lighting. Note how the last of these adds a psychological dimension to the characters.

2. Shoot on film: there’s gain in the grain. Counterintuitively this future proofs your images.

3. Keep it colourful: no one wants to see a dark and brooding Star Trek movie – this is the bright and enlightened 23rd century, not Gotham city. Oh, and try and avoid gimmicks. Lens flare is fine, in moderation (see John McTiernan) but excessive stylisation may detract from your wonderful screenplay, so it’s probably best to throw away that box of colour filters too.

4. When shooting action don’t shake the camera. Audiences generally hate it. You’ve got a steadycam operator, right? Use them. Use those tripods too. No one ever hated a movie because consideration had been given to shot composition, camera movement and the optimal point for cuts. A lot of people are going to see your movie, probably on a big screen. If your visual grammar sucks, they’ll notice.

5. Other than yourself, your two more important hires are your editor and composer. Both of them have the potential to get you out of the shit. The former can probably alchemise middling material, provided you’ve given them some choices, while the latter can add millions of dollars’ worth of atmosphere and emotional depth, in the highly unlikely event that your footage is lacking in these areas. Michael Giacchino’s scores have been pretty generic, I suggest you budget for someone who can formulate a melody and hit those dramatic cues with aplomb. Consider Henry Jackman, Hans Zimmer, Clint Mansell or, and here’s a wild card, a debutant like yourself – a hungry composer with something to prove. Oh, and make sure they provide a melody for God’s sake, none of that emotional foreshadowing bullshit. I want to exit this movie humming the themes.

That’s it, Bob. Good luck. This is a make or break movie for the franchise. Don’t blow it. Remember, Star Trek matters, you don’t. Never stop thinking about the audience, and I mean the real audience for this picture, not a general one who’ll pay to see anything with a marketing budget. They’re not the people who’ll be paying attention. Whatever the box office, the movie will only be a success if it’s well received by fans. That means giving them what they need, not what you think they want. So no call backs to previous episodes or movies – no in jokes – just a great story, new iconic moments, memorable dialogue.

It’s as simple as that.

A message over subspace – Bob’s response:

Thank you for your thoughts.
b
Thanks to Roberto for his gracious reply. Now you can be confident the movie will proceed with The Ooh Tray’s advice attached to the director’s clipboard, do you feel better about Star Trek 3: The Search for Critical Acclaim? Do tell, you never know who might be reading.
Tags: J.J Abrams, Roberto Orci, Star Trek, Star Trek 3
Posted in Feature, Film | 4 Comments »