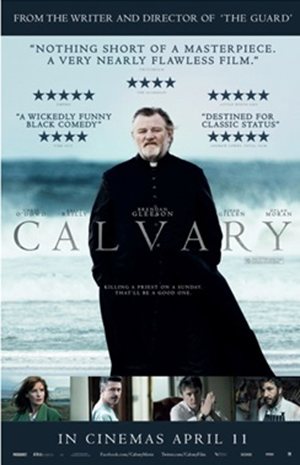 The conceit of John Michael McDonagh’s original and tragic black comedy, is that a good but troubled priest should take part in a perverse reinterpretation of Christ’s crucifixion, dying for the sins of others. The sublime twist is that said sins have been committed by the priesthood and consequently McDonagh’s film, anchored by the bulk and regret of a sterling Brendan Gleeson, is both an exploration of faith and the church’s increasingly problematic role in community life at a time when God’s representatives have never seemed so fallible, while the need for the certainty they provide has never been so great. It’s a wonderful film about one man’s earnest and heartfelt attempt at filling a hole; but it’s a void too big, even for the generously apportioned Father.

What’s notable about Calvary, a perfect title, encompassing both the Christ metaphor and the burden of the unseen parishioner threatening Gleeson’s life, is how a movie that begins with a description of child rape and a death threat in a confessional, goes on to be mordantly witty throughout while never diluting that threat, or veering into the ecclesiastical silliness of Father Ted. McDonagh’s grip on the material is commendable, necessary, because his climax depends much on pathos and drama for its impact, and refreshing when one considers the number of black comedies with few dramatic credentials. By grounding the tone and sharpening the dialogue – “you’ve been making good use of your library card I see”, is Gleeson’s rebuke to the publican who admonishes the church for stealing from the Jews and collaborating with the Nazis – McDonagh can shift seamlessly from a strained interview with a serial killer to Dylan Moran urinating on a priceless portrait without the jarring sense that we’re watching two different films.

The colourful cast of characters populating Gleeson’s troubled parish are allegorical in a good old fashioned way; the personification of Catholicism’s bête noirs, the cardinal sins (a point underlined by the story’s timeframe of 7 days), but moral though Gleeson’s priest is, his story is never moralising. Calvary’s universe is agnostic, disturbed. Gleeson’s contemptuous of those whose faith is shaken by events such as the premature death of a loved one and confident that God’s role in humanity’s future is assured, but his parishioners are far less certain; this is a Catholic country emerging from the headache of blind faith, ready to tear down old statues.

McDonagh’s crafted a fine state of Ireland comedy that’s both anthropological and theological, as any story set therein must be. There are flashes of great wit but what really marks out Calvary are its questions about the role of religion and the application of religious concepts to our everyday lives, not least predestiny; questions that stay with you long after the end credits have left you to your troubled thoughts.

Certificate: 15 for Chis O'Dowd, animal cruelty and urinating on artworks.