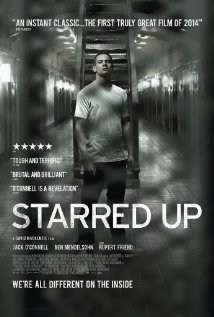 Hunger, Scum, In the Name of the Father, Tango and Cash, yes – these are the worst date movies ever made, but they’re also interested in prison and what it means to be a prisoner. Starred Up is such a movie and it’s very rich indeed. Centring on the son of a lifer who’s moved to his Daddy’s clink from a young offender’s institution, it explores the background to crime, it’s self-perpetuating nature, and how a system designed to dehumanise can hope to reform and rehabilitate those it diminishes, the added complication being that the law’s custodians are criminals, like the prisoners.

David Mackenzie’s film draws its power from its brutal realism. It’s not surprising to see Penny Woolcock’s name on the list of acknowledgements as the movie relies on the natural, raw dialogue and aggression between groups of unknown faces, to provide that bear pit, caged dynamic, underwriting its social-realist credentials.

Mackenzie deserves further credit for his shrewd use of the Victorian prison incarcerating his cast. His camera follows Jack O’ Connell’s delinquent through tight corridors, dark stairwells and into oppressive, claustrophobia-baiting cells. Long before we’ve got our teeth into the movie’s politics, we’ve got a notion of what it means to be locked up in an environment designed in a different age, underpinned by a wholly different set of assumptions about the criminal class that would populate such a building. Justice may be slower to advance than even parliament.

Starred Up might have been masturbatory material for Nuts readers; a power fantasy for closet hard nuts; but thankfully, given the arts funding awarded to the production through the BFI, it aspires to greater things, posing pertinent questions about institutional corruption, the criminal ecosystem and how the taxpayer’s representatives becoming willing accomplices, and what can be done to break the cycle of offending that guarantees a shadow culture in which recidivists move between prisons like a teacher changing schools.

That revolving door, symbolically shown at the close, and the ultimate futility of this kind of punishment, is what Starred Up marks so effectively. It’s a grimy, unflinching portrayal of prison life, bolstered by what we imagine to be great authenticity, and is likely to be a far better advertisement for staying out of trouble than any well meaning welfare officer.

Certificate: 18 for drooping genitalia, cluster c-bombs and a worm of drool.