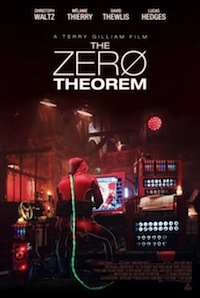 Terry Gilliam’s new film may have little momentum, a movie that apes its frustrated protagonist, going nowhere, waiting for a pay off that never comes, but it’s not short on ideas.

Set in a garish future where a corporation has moved to fill the gap vacated by religion, civil society’s traditional balm, where faith’s stock is so low that people worship conspicuous fictions like Batman, techies live in old churches and, in case you haven’t got the point, Christ’s head has been symbolically replaced on an old crucifix with one of the company’s CCTV cameras, Big Brother has mathematicians desperately trying to prove that the sum total of everything in the universe is measurable, and therefore ultimately reducible to zero when at last it succumbs to natural forces. If the numbers don’t match up then the awful implication in this Godless universe, is that there must be something more – maybe the soul or other intangibles like Claudia Winkleman’s career in arts journalism.

The poor bastard charged with squaring this circle is a man awaiting the meaning of life from Mancom, Christoph Waltz. Shaved to look like Bruce Willis in Gilliam’s Twelve Monkeys and equally confused, Waltz’ character is a curiously inflected oddball who talks of himself using the first person plural (a real test for an audience asked to emphasise) and spends much of the running time courting forbidden love online with kooky blank, Melanie Thierry, while trying to crunch impossible numbers. If this kind of futility has an Orwellian flavour, reminiscent of Gilliam’s Brazil, then that’s where the comparisons end. The Zero Theorem is an unfocused, inchoate affair that never fully engages.

Writer Pat Rushin has a fine premise, but neither he nor Gilliam are able to imbue it with character, nor move the story forward in any meaningful sense. Considering Rushin teaches Creative Writing at the University of Central Florida and Gilliam’s a director of some note, neither man can be forgiven. Rushin’s students may wish to consider a transfer.

David Warren’s production design makes for a colourful and quirky spectacle and Gilliam fans will appreciate the off-the-wall atmopshere and theatrical jauntiness, but there’s no escaping the fact that Zero Theorem’s dystopian tropes feel old hat. This is Gilliam karaoking his best tunes. It’s not bad enough to feel there’s no God but nor is it a film likely to touch your hidden soul.

Certificate: 15 for a future in which iPads still appear at parties, David Thewlis and Matt Damon's hair.