Film Review: Under the Skin 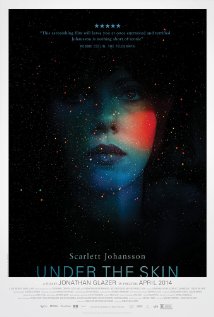 The Woman Who Fell to Earth

There’s plenty to remind you of vintage Nicolas Roeg in Under the Skin; the emotional distance, the disorientation, the dread. Not for nothing does Scarlett Johansson, a siren in the natural order, look like Mick Jagger in Performance, or maybe, at an angle, James Fox. It’s not that Jonathan Glazer’s masculinised her per se, but he has succeeded in turning one of the world’s most desirable women into the awkward, slightly built alien of Michel Faber’s source novel. Not as myopic or disproportioned to be sure, but uncanny, cold, dead behind the eyes: plausible bait for unsuspecting human specimens who, existing in-movie, are only privy to diegetic sound, so can’t hear the ambient rumble, hysterical strings and discomforting foley, divested of discreet atmospherics, that follow Scarlett around.

Glazer’s risen to the challenge of rendering the world from a predatory alien’s perspective, magnificently. His film is a discomforting piece of defamilarisation. Glasgow and environs, a curious enough environment to those indigenous to Earth, is shot covertly, at a distance, as though the crew, terrified of their star, thought it best to do their job from a hide. Scotland, the film’s most important character, plays its part: the weather’s violent and tangible, the country foreboding, and its people – Scarlett’s victims, stripped of the context that gives a narrative its humanity and understanding, are the animals she imagines them to be. Children wail, packs of girls descend on her like a herd and in 2014 there’s no image on film more brutal, or indeed more primal, than a frightened baby left to cry on a beach at night, it’s parents drowned, the alien that witnessed the accident, indifferent, gone.

The film’s inhuman dimension, though congruous with its subject, will, pun intended, alienate some audiences. Reliable crutches – motivation, expository dialogue, a human protagonist/antagonist – are kicked away. What remains is anthropological, cold-blooded, sometimes unbearable. In a movie that turns the human condition over and examines the underside, so we become a bug on our back, interactions are recast as a series of nightmarish vignettes.

Johansson picking up a man with a prominent facial deformity, a man who pinches himself as any of us would, is sad, tragic, horrifying and cruel all at the same time. It’s worse for not knowing, in keeping with the film’s ambiguous bent, whether Johansson’s alien knows how deformed he is. What’s her baseline? Sex is hideous in Under the Skin: you fear the moment a good Samaritan, looking after a wayward Johansson, will try to penetrate her. Knowing there’s a biologically incompatible creature underneath the female veneer makes all the difference. In this zoological rendering of humanity, with horrors natural and unnatural, even an opportunistic rapist can give an unlikely assist to mankind. A movie divested of moral and civil reassurance is tough on the gut; it’s also the very definition of essential viewing.