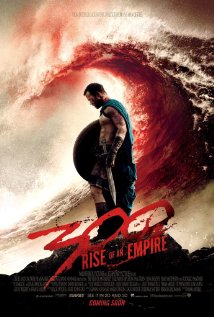 Zack Snyder’s 300 was such a long time ago that you could be forgiven for thinking he’d made it in antiquity. Remember when that living graphic novel aesthetic seemed fresh? A bold, colourful, pop art visual schema went some way toward persuading audiences that they should overlook the fascist-friendly objectification of bodies, the homophobic innuendo, the ancient world dialogue clichés and the flat as a-page-in-a-comic-book characters. The same privileging of form over content was evident in two other Frank Miller adaptations, Sin City and The Spirit. They looked great, they left not a single impression on their audience. Alan Moore’s warning that any movie adaptation of a graphic novel will inevitably be lost in translation, seemed apt.

Rise of an Empire both sidesteps and sequelises Snyder’s testosteronic fantasy, with new director Noam Murro doing much of the same with elements of Miller’s Xerxes graphic novel as his predecessor did with the last. Taking the Greek’s mantra of shock combat as his manifesto for the piece, Murro takes great care to ensure that the movie’s look and feel is as every bit as brutal and painterly as its forerunner. 300 fans (though there may be more) concerned that sans Snyder there would be less stylised violence, less overcanking, fewer oiled torsos and fewer wounds augmented with CG geysers of blood, can relax; visual continuity is achieved and then some. What’s new is the scale: bigger theatres of war, greater carnage, and Murro’s kind enough to acknowledge our presence, ensuring the forth wall is awash with seawater and spray from fleshly cleaved wounds.

With Butler’s Spartans busy elsewhere, the sea battle between Persia and the other Greek States requires new faces and here Murro is half lucky. The evil army have an eyeliner-heavy Eva Green, a villainess with verve, who may be no match for the 21st century male gaze, succumbing as she does to a scene in which she has a combative bare breasted negotiation with her foe, while ostensibly vying for sexual dominance, but, in-story, can claim to be every bit the Greek male’s equal – her brutality marked by memorable, eroticised asides like the kissing of a freshly severed head. Sadly on the Greek side there’s the second string muscle of Sullivan Stapleton, whose Themistocles grandstands, grunts and frowns his way through the action with admirable spunk, yet never manages to be more than a cardboard warrior – a character whose lack of charisma would matter more were we not distracted by Green so often.

Yet it’s just possible than fans of the first film will care little for these deficiencies, instead being overawed by the panel-pastiching opticals and simple, chest beating machismo. Rise of an Empire’s uncomplicated fare for those who yearn for a time when men were prisoners of their masculinity and expected to kill as a consequence and women were brutalised by rape and the murder of family members into being as psychotic as their male counterparts. It’s a reassuring movie for an uncertain time when male and female identity is meeting in the middle: a movie that uses the camouflage of legend and fantasy to licence its target audience of adolescent males to stroke their cocks in public without shame or apology.

Certificate: 15 for Eva's Greens, a horse hoof on a head and a Persian suicide bomber.