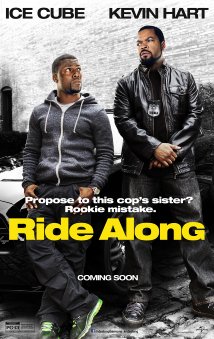 Ride Along’s fascinating on one level because there’s absolutely nothing original about it. Buddy cop comedies have been done to death, even this variation on the formula, in which a hard bitten plod babysits an enthusiastic irritant who rebuffs the cop’s attempts at putting him off before finally gaining his respect and saving him from the criminal he’s obsessively tracking, is a direct lift from John Badham’s The Hard Way. There it was funny of course, here it’s laboured and mirthless. Universal will counter that the movie does have a unique selling point, the crowning of Kevin Hart as a big screen comic talent, but even there they’re plagiarising the past. Hart’s shtick is so similar to Chris Tucker’s, a shrieker we never missed, that it seems likely he was grown from the old man’s DNA. Yes, Ride Along is the quintessence of derivative and naturally it’s been a huge hit as a result.

If Tim Story (no relation to The Neverending) couldn’t coax a single, discernable punchline from his cabal of five writers, he did at least insist on one thing – and it saves the picture – Ice Cube, the bad tempered, tough as burnt steak detective, is the perfect straight man, saying and doing everything, beat for beat, word for word, that we’d expect a man trapped with Kevin Hart for one long day to do.

So succinct are his put downs, so accurate his analysis of Hart’s failings as a would-be police officer, and so contemptuous is he of the unfunny man’s relationship with his beautiful, ornamental sister, it’s almost as if he’s channelling the audience. Had Cube been a scintilla more tolerant then the gap between the people in the dark and the characters on screen would have been too great. The dynamic between the two characters is therefore perfect: it’s credible, we believe it, and consequently it almost doesn’t matter that this buddy comedy only thought to supply the buddy.

Credit where it’s due to the writing team, they find plausible outlets for Hart’s personality – not least a third act twist that uses his gab very well – but there’s no getting past the fact that Ride Along is a witless and therefore inconsequential affair, destined to be confused for many similar movies that did it better, having had the foresight to compose jokes and craft iconography that caused said flicks to lodge in the audience’s mind. Production note for Ride Along 2: please ask Mr Hart to lower his voice. Many thanks.

Certificate: 12A for Kevin Hart, jokes lifted from Police Academy 4: Citizens On Patrol and not one single original idea.